Freedom of Conscience Only for Non-Christians 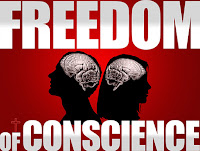 This past December, the contractor who installed our irrigation system performed some minor maintenance for us. After he was finished, we were catching up with small talk. He paused the conversation, looked concerned and asked me who I had voted for in the recent Presidential election. I informed him of why I could not vote for Clinton and why I voted for Trump. He smiled and proceeded to tell me about an all too common story. Several months prior, he had installed an irrigation system at a home of a lesbian couple. They got to know each other and he even hung out with them one afternoon over drinks. Months later, out of the blue, he received a call from one of the women. With urgency, she demanded to know who he voted for. He reluctantly explained why he could not vote for Clinton and why he voted for Trump. She proceeded to inform him, with malice, that she is contacting all of her contractors, doctors, lawyers and service providers and cancelling all business with anyone who voted for Trump. He was shocked at this display of inappropriate behavior, intolerance and discrimination against those of a different point of view. My wife and I decided to spend another hour or so consoling him and encouraging him. He was clearly rattled by this vengeful display of bigotry by those who claim to fight against vengeful displays of bigotry. But, this is nothing new as there has also been a similar steady and growing stream of hateful hypocrisy being directed at Christians for the past several years. So much for live and let live.

Apparently, discrimination and bigotry is immoral against those of a different view or belief, unless your target is a Christian - and now someone who supports your political foe. And, the list is long of repercussions and punishments against Christians over long-standing, clear, Bible-based convictions. For those who have ignored this issue and repeatedly demand proof that this is systematically happening, click HERE for a much more detailed list. The activists against Christians are hypocritical preachers who claim Biblical views are immoral and therefore worthy of punishment, all the while condemning Christians for preaching about immorality that God will punish unless we receive His free forgiveness. Yes, you read that sentence accurately. And, now these truly hateful and violent bigots are turning their attention towards attacking, discriminating against, threatening and bullying those who dared to be immoral in their eyes by voting for Trump. It is one thing to hold to a view. It is yet another to openly and actively seek to punish those who think differently. That is the dangerous opposite of tolerance.

In the wake of Trump’s election, several fashion designers have refused to design dresses for Melania. There have also been high profile cases of employers demanding Trump voters resign from their jobs. All of this vitriol from those who were violently outraged that a bakery would refuse to bake a cake for a “gay wedding.” Back then, the reasons the Christians abstained are no different, if not more noble, than people’s reasons for boycotting Trump supporters: Freedom of conviction. Reasonable thinkers realize that all businesses have the right to object to business that violates their convictions. We, therefore support Christian bakers as we also support the freedom of conviction of the above fashion designers. But, don’t wait on the preachers of hypocritical tolerance to agree with us – they don’t. That is why they should be ignored. In fact, they preach punishment to Christians for daring to hold to their beliefs while they demand freedom to hold to their own. Do you see the problem? Probably the highest profile case was the case of Kim Davis, the Kentucky clerk who objected to signing “gay marriage” certificates over freedom of conviction. Even though there were other reasonable means available, Kim Davis was immediately jailed indefinitely by a judge acting unilaterally and with no support of statute. The difference between we reasonable thinkers and the left is that we don’t advocate for punishing people over thoughts. We actually advocate for true tolerance – live and let live. But, those who actually preach hypocritical tolerance advocate for punishing people for their thoughts. (I wrote in great detail in a separate post regarding the Davis case HERE)

Everyone, without exception, should have freedom of thought and speech. And, believing that immoral sexual behavior is immoral does not qualify as illegal and worthy of punishment. It also does not qualify as hate. Neither does having conviction against “gay marriage” qualify. In fact, in every case where Christian-owned businesses objected to serving “gay weddings” they still welcomed the business of the same gay patrons who were otherwise getting married – they were just not willing to serve the ceremony over obvious and reasonable conviction. It is reasonable to understand this because it is common sense. And, that is precisely what all of these other leftist businesses are attempting to do to Trump supporters. We, however, support the freedom to deny business that is of a nature that contradicts the conscience of the business owner. The hypocrisy on the left is that they only support this if service is being denied Christians, but they deny Christians the right to hold their convictions. This hypocrisy towards Christians is the worst form of intolerance. It is one thing to openly disagree with someone, it is an unholy other to threaten to silence them with physical means.

The reason why we reasonable Christians advocate for true tolerance is because God does. Romans 1:28 wraps it up, “And since they did not see fit to acknowledge God, God gave them up to a debased mind to do what ought not to be done.” Even God grants freedom of thought. Thinking “gay marriage” is immoral is not dangerous. Imposing actual and true punishments against Christians for their views is. Only one side is advocating for the physical denial of freedom – those attacking Christians – and now attacking Trump supporters. If you are doing either, you are part of the problem. Double standards are destructive. Their destruction begins with destroying standards followed by much worse destruction – ourselves.

Earlier this year, Cross Creek Pictures released the movie, “Hacksaw Ridge.” If you have not seen this movie, and can stomach graphic war violence, this movie is a must see. It chronicles the true story of Desmond Doss, who in view of his religious convictions against killing, still enlisted to serve in World War II. He wanted to risk his life for his country by saving the lives of others on the battlefield. He persevered in spite of intense persecution in boot camp, served in the Asian theater, and saved approximately 75 soldiers in harm’s way while refusing to carry a weapon onto the battle field. It is a beautiful story of what it looks like to face physical abuse over your conviction and stand strong and honorable. At the end of the movie, during the credits, interviews from eye witnesses were shared. One of the witnesses said it well when he insisted that nobody should be asked to breach their conviction “because conviction is who we are.” I can’t say it better than that. Convictions are who we are, whether you have a conviction in favor of “gay marriage” or opposed; whether you have conviction in support of Trump or opposed; whether you are an ardent disciple of Jesus Christ or opposed. Conviction is who we are. Stop trying to punish the conviction of others.

In conclusion, Christian, hold fast to your convictions from God’s Word, no matter what the cost. And, don’t try to punish the convictions of others. As Jesus prophesied, it will probably cost you dearly to keep your convictions. As it does, if your faith endures, your story will be heroic like Jesus, whom we emulate (and like Doss). Jesus stood for the same convictions that we Christians stand for today. Jesus would not call sin “love” because He is Love. And, conviction is who we are. As we endure growing persecution, don’t be hypocritical like others. Instead, remember to pray for those who persecute you. Turn the other cheek. Love your enemies. After all, that is what our Shepherd endured for us.

You can purchase the book "Reason If You Will - How To Answer Questions Regarding Faith" by clicking HERE. Profits go to Camp Bahamas. You can also follow @ReasonIfYouWill on Twitter.
Posted by Tim Albury at 8:11 AM
Email ThisBlogThis!Share to TwitterShare to FacebookShare to Pinterest
Newer Post Older Post Home