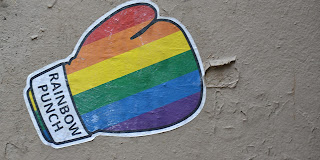 This past week, we witnessed two startling and contrasting responses to two separate religion-based expressions. Abdul Razak Ali Artan, a Muslim, in the name of his religion, attacked a crowd of innocent students on the campus of Ohio State University by plowing his car into them. After stopping the car, he then attacked others with a large knife before the police faithfully killed him. The response from the left to the rest of us was yet another swift urging against "Islamophobia". In contrast, later in the same week, a BuzzFeed post revealed the obvious fact that the famous couple who are the stars of the hit HGTV show, “Fixer Upper,” Chip and Joanna Gaines, attend a church that preaches that homosexual acts are sin (like the vast majority of churches). And, in this case, the left had an opposite urging. They did not urge us against Christianophobia. They called the pastor and the Gaines couple homophobes, who should be denied their jobs because they are dangerous. The agenda behind the contrast is obvious. But, the danger of this contrast speaks volumes. Which expression was actually dangerous? Why do I even need to ask that question? By the way, note to the left: Islam also teaches that homosexual acts are sin, except they believe it is punishable by death. I don’t see Christians acting violently against “homosexuals” while Muslim nations actually execute them. Are you paying attention?

In the west, the irrational assault on Christians and their convictions continues. It begins with name-calling, followed by judgment, followed by condemnation, climaxing in actual bullying. Yes, it is expressed against Christians in all of the ways of which Christians are actually accused. How dangerously ironic? And, it all begins with name-calling (by people who call themselves adults). For this purpose, homophobe is a derogatory name chosen for ill intent. So let’s examine the term. Homophobe is defined as “a person who fears or hates homosexuals.” It comes from the combination of the words “homosexual” and “phobia.” And, that leads us to examine the word, “phobia.” Psychiatry defines phobia as “an abnormal intense and irrational fear of a given situation, organism, or object.” Focus on the definition again – is it truly being hurled accurately? Yes, God in the Bible calls homosexual acts sin, just like heterosexual acts outside of marriage He also calls sin. By extension of the world's logic does that mean that subscribing to God’s word we are then also heterophobes? Are we then also thievophobes and covetophobes? I believe that a homosexual act is a sin just like I believe it is a sin every time I have a lustful thought about a woman other than my wife. That does not mean that I hate anyone or fear anyone. In fact, I hate nobody and I fear nobody. To illustrate, when I have a lustful thought about another woman, I see it as sin that I must run from. But, I don’t fear or hate myself. Are the name-callers truly listening to reason and rational thought? Should we be listening to them?

Anyone who lashes out at a group of people by foisting a label upon them with “phobe” or a derogatory “ist” on the end of the label, is actually a person who is acting hatefully, harmfully, and immaturely. On that last adverb (immaturely), to make my point, the last time name-calling was so popular was when we were all in grade school. This regression to child-like norms is not only contemptible, but also asinine (look up the definition before you react to using that word). Nobody should be dealing in derogatory name-calling, especially Christians.

There is also an amazing irony to those who lash out at faux phobias. What does it suggest when those who are accusing others of phobias are at the same time acting in ways that inspire fear in those they accuse? In other words, if being fearful of a certain type of people is a bad thing, then why are you bullying those you accuse of being fearful into actually having fear? Doesn’t bullying inspire fear? Aren’t you actually signaling that they should fear those certain people by threatening them if they don’t change their minds? Aren’t you inspiring phobia? That is like degrading someone as a robberphobe because fear grips them while a robber just placed a gun to their head. For example, targeting a Christian baker until they are out of business and bankrupt actually inspires fear – don’t you get it? Your actions to end phobias actually cause them.

By the way, even if the name-callers are right, is it truly wrong to fear something or somebody as long as you don’t truly hurt them? Does fear truly equal hate? The true purpose of today’s brand of name-calling is to define people by a label, judge them, and condemn them until they submit. That sounds pretty horrific doesn’t it? Who is really behaving more like someone with a phobia? Are Christians afraid of homosexuals or are homosexuals afraid of Christians? Christians aren’t threatening homosexuals with life-threatening punishment. But, the same can’t be said of the inverse.

Regardless of where you stand on this issue, we should not be defining people this way. We should not be accusing others with derogatory labels. The label “homophobe” belongs in the same bucket as “fagot.” We should destroy both labels. Labels seek to reduce the definition of others to a label. It is a form of dehumanization, which is an assault on the image-bearers of God. Every human being bears God’s image. There is no label that is being thrust around today like weapons that is truly defining, but rather demeaning. For example, if I tell a lie, am I a liar? Or, am I a generally honest person who just now chose to lie? Do you see the difference? Labeling people as is being done today is meant to actually hurt them. And, it is also not effective in improving society, but devolving it.

Before we get to scripture, one last point about labels is that the last label we should ever use is one that defines a person by their sexual deeds. I don’t walk up to people I don’t know and say, “Hi, I am a man who routinely engages in sexual acts with a woman.” That would be pretty inappropriate wouldn’t it? In fact, if I am alone, I don’t even mention that I am married. But, by the same token, today we have the label police encouraging homosexuals to both label others at the same time as they introduce themselves by their sexual label: “Hi, I am a man who routinely engages in sexual acts with a man.” That is ridiculous. Do you remember when the LGBT movement began? The rallying cry against the other side was "Stay out of our bedrooms!" Well, today that has devolved into wearing our bedrooms on our name tags. If you don’t want people in your bedroom, keep them out by the way you speak - keep your bedroom private. Don’t introduce others into your bedroom. And stop trying to force other people into accepting what you do in your bedroom. Frankly, I would rather stay out of your bedroom. It truly is none of my business. And, neither are my thoughts and free speech any of your business, frankly!

Christian, the Bible has a lot to say about name-calling and fear. Ironically, embedded in the famous love chapter is 1 Corinthians 13:11, which says, “When I was a child, I spoke like a child, I thought like a child, I reasoned like a child. When I became a man, I gave up childish ways.” Name-calling is childish at best while also being hateful at most. Ephesians 4:29 says, “Let no corrupting talk come out of your mouths, but only such as is good for building up, as fits the occasion, that it may give grace to those who hear.” That verse applies in so many ways to all sides of these discussions. And, in Matthew 10:28, Jesus said of fearing man, “And do not fear those who kill the body but cannot kill the soul. Rather fear him who can destroy both soul and body in hell.” Any questions?

In conclusion, one of the many beauties of God’s grace is that, if we commit our whole life to Him (Galatians 2:20), we are forever forgiven. That means that no label can ever stick, unless we choose unrepentance. When we choose to glorify flesh above God and not habitually repent, we are sadly choosing the label over His grace. We are choosing a sexual identity (flesh) over a Spiritual identity. Grace kills all derogatory labels. Which is why even though I am occasionally guilty of sexual sin (lustful thoughts), it does not label me as an adulterer, as I agree with God and repent of it. But, choosing sin over Spirit is voluntary choosing of the label. I have known several Christian men in my life who are tempted by homosexuality but resist the temptation on spiritual grounds. I don’t call them homosexuals. I call them brothers. And, I don’t fear anyone, especially a brother.

You can purchase the book "Reason If You Will - How To Answer Questions Regarding Faith" by clicking HERE. Profits go to Camp Bahamas. You can also follow @ReasonIfYouWill on Twitter.
Posted by Tim Albury at 7:24 AM
Email ThisBlogThis!Share to TwitterShare to FacebookShare to Pinterest
Newer Post Older Post Home