How Abortion Is Relevant In 2016 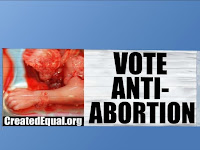 Have you ever pondered the question of whether you lived prior to Hitler’s atrocities and had the opportunity to assassinate him, would you do it? Would you support someone else assassinating him? Would you at least support a treasonous uprising that jails Hitler before he starts his killing rampage? Don’t worry, we are not comparing anybody to Hitler. What most people don’t remember is that in the 1930s, Christians in the West were aligned with Stalin in his opposition to Adolph Hitler. Stalin was no saint – quite the opposite. But the enemy of our enemy is our friend. And today, there is still a juncture in which our country finds itself where the lives of the innocent are being corruptly threatened in larger numbers, while still being largely avoidable. There is no greater evil on the ballot today than abortion. We in America already have more infant blood on our hands than that of the entire Holocaust combined. And, don’t kid yourself – it is on the ballot in 2016. There is very much a fight still to be had. And, there is no distant immorality of any particular candidate that overshadows this evil in the eyes of God.

Why is abortion still relevant in 2016? Many Christians have argued as defeatists that we will probably never overturn Roe v. Wade. And, therefore, they give up on this issue altogether. That is precisely what our enemy is cheering for us to do. But, the abortion issue is so much bigger than just overturning Roe v. Wade. First of all, overturning Roe v. Wade has nothing to do with the legality of full-term abortion, since Roe v. Wade agrees with us on full-term abortions. And, opposition to full-term abortion is supported by the vast majority of Americans today. In current polling, the majority of Americans support banning abortions except in certain circumstances. In addition, the vast majority of Americans support fully informed consent prior to abortion. All of these battlefields are still relevant with millions of innocent lives at stake. Most importantly, what most Christians missed or chose to disregard in the final Presidential debate on October 19th is the following quote by Hillary Clinton: “The kinds of cases that fall at the end of pregnancy are often the most heartbreaking, painful decisions for families to make. I have met with women who toward the end of their pregnancy get the worst news one could get: that their health is in jeopardy if they continue to carry to term, or that something terrible has happened or just been discovered about the pregnancy. I do not think the United States government should be stepping in and making those most personal of decisions for women. So, you can regulate if you are doing so with the life and health of the mother taken into account.” And, Johnson’s position is not much better.

First, Hillary’s statement is undeniable support for full-term, partial birth abortion on demand. That is not the will of the people and not even in keeping with Roe v. Wade. Second, Hillary Clinton lied by fabricating examples where full-term abortion is necessary for the mother’s health. No such circumstances or examples exist. Notice how she did not mention the medical threat. According to ob/gyn, Dr. Lawrence K. Konig, “As an ob/gyn physician for 31 years there is no medical situation that requires aborting / killing the baby in the third trimester to ‘save the mother's life.’ Just deliver the baby by c/section and the baby has 95+% survival with readily available NICU care even at 28 weeks. C/section is quicker and safer than partial birth abortion for the mother.” By the way, isn’t that also common sense? What does it say of a Presidential candidate that would lie to defend that which is most deplorable and without defense? What on earth is more dangerous, evil and immoral than this? There is only one medical reason for full-term abortion, and that is the harvesting of full-grown baby tissue – harvesting babies!

What does such a deceiving tactic reveal about the present moral judgement of a candidate? Which speaks more to present moral judgment of the candidate, graphic sexual remarks 11 years ago, or lying in a national debate last week in order to defend partial birth/full-term abortion? Are we truly going to be deceived to overlook the brutal killing and harvesting of innocent children over yet another lie? And, Clinton’s running mate, Tim Kaine, is no better. In the only Vice Presidential debate, he displayed the audacity of quoting a Bible verse (Matthew 12:34) in making his case in favor of abortion. In paraphrase, he said his Catholic faith opposes abortion, but it is the law of the land. Apart from the fact that it should send chills down every Christian’s spine that Clinton’s Vice Presidential pick would distort the Bible to defend abortion, how pathetic an answer is that? Well, slavery was the law of the land. Does that mean the Christians back then were excused from aligning with abolitionists? Thank God that some Christians did not compromise their principles then as Kaine does now. Oh, and isn’t the 2nd Amendment the law of the land? But, you fight that vigorously tooth and nail. At best, the “law of the land” response is cowardly, and at worst murder-abetting. You be the judge.

But, even besides the issue of partial birth abortion, informed consent and a host of other battles to still be fought, there still remains the issue of the left’s attempt to force we the taxpayers to fund the abortions of others against our convictions and against our wills. Those, Christian or not, that support taxpayer funded abortion are by far the minority. Most people are willing to tolerate abortion in certain, narrow circumstances, but certainly not making someone else pay for it against their convictions. Full-term abortion on demand is not supported and neither is forcing tax dollars to fund it. But, the left forces this through Obamacare. Even though Obama signed an executive order to the contrary at its passage, that is easily reversed by executive order by a leftist and corrupt President. And, since its passage, the Obama administration has been actively suing religious organizations over the issue of paying for abortions through Obamacare by way of premiums. This is the unholy agenda. They seek to cram the grotesquely immoral full-term abortion argument down our throats through lies, while they force us to pay for it against our will. It would be one thing if it were all made legal. It is an unholy other to force anyone, especially Christians to pay for it.

Regardless of Trump’s immoral past, on this issue, he is the most moral and most aligned with Christians and our God. That is a black and white, clear-cut fact. And, since he is paying dearly for all of the stands that he is choosing to take without wavering, I would take him at his word. While he used to be a pro-choice Democrat, he is now all-in on the pro-life platform, even at the expense of his own reputation. While his position has evolved over the years, when faced with militant, even threatening opposition, he is not caving on defending the unborn. I will take that form of evolution over the evolution in positions we see on the left. The evolution of positions Hillary has taken has not cost her anything. The evolution that Trump has taken has possibly risked everything. That is evolution of position that I can defend.

What would you do to save millions of children in the womb? How far are you willing to go to protect the lives of the unborn? Are you willing to fight to cut the unholy confiscation of your money to fund wholesale murder for harvesting? If you would deny yourself, what would that look like in a voting booth in 2016? Christian, we were never called to be a people that casts stones at others, especially when the one we are stoning is fighting for us. With two weeks until Election Day, there is only one viable and credible obstacle to the Godless, evil and Hell-bent platform of Hillary Clinton. There is only one option that stands opposed to the corruption that assaults the will of the people. There is only one option that promises to fight for what we value. If you are willing to support Stalin's opposition of Hitler, how far are you willing to go in a voting booth to defend the unborn? Is there something more compelling than stopping this evil? Said another way, after another 50 million babies are dead, how will you feel about your vote when you look back to 2016?

You can purchase the book "Reason If You Will - How To Answer Questions Regarding Faith" by clicking HERE. Profits go to Camp Bahamas. You can also follow @ReasonIfYouWill on Twitter.
Posted by Tim Albury at 7:08 AM
Email ThisBlogThis!Share to TwitterShare to FacebookShare to Pinterest
Newer Post Older Post Home