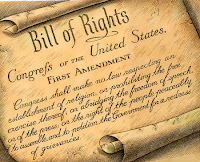 It is amazing to me to see so many Christians stretching and squirming to defend their vote for a flagrant criminal. It is likewise amazing to watch them stretch to support candidates who openly support abortion and the taxpayer funding thereof. It is amazing to watch Christians wrestle with voting for a narcissist. But, the thing that is most astonishing and the opposite of redeeming is watching Christians vote against religious freedom. Religious freedom is by far the highest ranking issue on the ballot this November, period and hands down. Yes, abortion is important, Israel is important, immigration is important, the economy is important. But, what should be the most important issue to those who claim religion to be their driving passion? Religious freedom is the number one issue this election season for the Christian. And, everything else is secondary.

Religious freedom is the first of the Constitutional Amendments that we call The Bill of Rights. All other freedoms begin with religious freedom. It is the foundation of religious freedom that has guaranteed all of our other freedoms in America. In fact, freedom is another word for liberty which is what our Constitution is meant to secure. The First Amendment reads, “Congress shall make no law respecting an establishment of religion, or prohibiting the free exercise thereof; or abridging the freedom of speech, or of the press; or the right of the people peaceably to assemble, and to petition the Government for a redress of grievances.” The First Amendment is our first priority Constitutionally. All else is secondary or worse. For those who fight for voting rights and abortion as the “law of the land,” neither of those are actually mentioned in the Constitution. But, religious freedom is the first of the Bill of Rights. It is the first of all civil rights, aside from life. And, it is the very basis that America was founded upon. Thomas Jefferson even called religious freedom “the most inalienable and sacred of all human rights.” If it were not for our insatiable desire to freely worship, there would probably be no United States of America. Therefore, especially in days where it is most threatened, once again, it is the most important issue. Can you think of any issue that is more important to God than religious freedom? As you answer that question, remember that God is the Almighty Father of Christians and He does all that He does to make His children free, much like a good Earthly father (especially free to worship). What on this Earth could He value more in the political realm? With that backdrop, let’s examine together where the major candidates stand on what is most important to God.

Hillary has expressed clear opposition to religious liberty. A few of her many quotes are as follows:

While Gary Johnson is not a major candidate (Libertarian), he is no better, if not worse, on this issue. A few of his many quotes are as follows:

Ironically, while not perfect on the issue, the only major candidate running that is courageously bullish and outspoken on preserving religious liberty is Donald Trump. Of the three candidates that this post highlights, his stated views are the closest to Constitutional and that with which Christians should align. To illustrate, here are a few of Trump’s quotes on the issue:
Interpretation: Trump will fight for the First Amendment, unapologetically.
Interpretation: Trump will fight for the freedom of speech and religion that emanates from the pulpit.
Interpretation: Trump is in favor of religion playing the role that it played from the beginning of the American founding. This is in perfect keeping with the First Amendment (a.k.a. the law of the land).

Jesus gave examples of His view towards religious freedom as in Matthew 19:16-23. And, even in the Old Testament, we have the famous quote from Joshua regarding religious freedom in Judges 24:15. Also see more from Jesus in John 8:32 and 36. But, the clear message of the Gospel and the entire Bible is God’s message of freedom borne of faith, hope and love. In fact 2 Corinthians 3:17 says, "Now the Lord is the Spirit, and where the Spirit of the Lord is, there is freedom." Freedom of religion is the most important civil liberty to be voting upon this election and every election where it stands in question. If you disagree, look God in the face and tell Him, "I don't think your children should be free and I will oppose their freedom." Our freedom of religion has never been more threatened since the Constitution was penned than it is today.

In conclusion, the culture wars are all but lost. The monstrously growing government remains as the single biggest threat to our remaining freedoms. Our last line of defense, and our most important line of defense, is that of religious freedom. If there is a litmus test for voting today, that is it. Vote wisely. But, if you vote against religious freedom, please don’t claim that you do so for God. The Heavenly Father to Christians and such a vote are not aligned.

You can purchase the book "Reason If You Will - How To Answer Questions Regarding Faith" by clicking HERE. Profits go to Camp Bahamas. You can also follow @ReasonIfYouWill on Twitter.
Posted by Tim Albury at 8:27 AM
Email ThisBlogThis!Share to TwitterShare to FacebookShare to Pinterest
Newer Post Older Post Home