Too many political pundits have attempted to define the dynamic of the 2016 Presidential elections with repeated failure. They have countless times predicted the fall of Donald Trump and the rise of the establishment candidate du jour with miserable results every time. Are they terrible pundits or are they just unable to understand what the electorate is truly saying? We believe it is both primarily because of the latter. After all, if pundits truly listened to the voters instead of their own opinions, they might make more accurate predictions and commentary. At the risk of seeming like a pundit, allow us to offer our own interpretations. We believe there is a simple reason why we are observing what we are observing. We are observing an attempt at a peaceful revolution.

On the night of Super Tuesday, Governor Chris Christie came closest when he introduced the victorious Trump by proclaiming, “This is not a campaign; this is a movement.” He is right. Like it or not, a movement is afoot - a revolutionary movement in fact. If those words being mentioned cause you to race to your keyboard to disagree, pause for a moment and critically think about it. And, if you seek to demonize these words as “illegitimate anger,” remember how this country was started. America was forged with a Revolutionary War borne of angered subjects who were too long denied their rights. How many times have we been lectured to about voting with anger and how anger is an illegitimate motivation? As we have posted before, such preaching would be correct if anger were directed at an individual. But, this anger is not so directed. It is directed at an oppressive government that daily subverts the will of our people and denies their rights. All revolutions are borne out of the systematic subversion of the will of the people. And, revolutions and the brand of anger that motivates them are not always wrong (America’s Revolution, for example).

The reason the pundits are repeatedly wrong is because they don’t yet understand this motivation. The will of the American people has been grossly subverted for several years now by both parties and all three branches of Federal Government. Allow me to share just a few of the many examples:

And, the list goes on and on and on. Since our government is ignoring the will of the people, the people are choosing to revolt – peacefully. Both parties are responsible for this revolution in that they orchestrated the voter subversion that necessitated it. The voters and the candidates are not the problem – The government establishment in both parties is the problem. In the words of the brilliant pundit, former Speaker of the House Newt Gingrich, the people want to turn over the tables, not just have a career politician continue to manage the tables. Gingrich is one of the few pundits who is right. The rules have changed because the people want them changed. And, anger and revolution in this case are not worthy of demonization. They are worthy of heeding.

It is interesting to see how many people don’t notice that the rules have changed. For example, they wonder, even publicly, how nothing deters Trump’s support. The reason is simple. The people that choose Donald Trump do so because they see him as the best person willing and able to mount a peaceful revolution - Constitutionally. Of the six remaining candidates, he is the only candidate who is an accomplished executive that is not a career politician and is not financing his campaign from special interest groups. Almost immediately, the faulty pundits will quip “But Trump is not receiving a majority of the votes – the majority is voting against Trump.” In spite of this always being the case in primaries, the other candidates are getting votes, but the quips ignore that there is no “anti-Trump” option on the ballots. In fact, votes for Cruz and Sanders are also arguably votes for peaceful revolution given what they are campaigning for. The majority of voters in America want revolution. Those who mount arguments that ignore this motivation and resort to slinging mud to silence voters, are missing the only point that matters, which is precisely why the arguments and mud-slinging are not working.

Again, these candidates and the voters are not the problem. Rather, those who stand for continuing the subversion of the will of the voters (now in primaries) are the problem. For example, you might have heard the references to a “brokered convention.” A brokered convention is typically the method used when there is no clear nominee. If no single candidate has the needed number of delegates from the primaries, then the delegates have to negotiate at the convention in order to finalize the election of a nominee. But, this procedure was not designed to be abused in order to subvert the nominee who has duly earned the requisite number of delegates. If Trump or Cruz earned the needed delegates required for the Republican nomination, to ignore the will of the people and “broker” a different candidate for nomination will probably be the last straw for preserving the Constitutional system of government that we have. A horrible example of what not to do is what Mitt Romney prescribed over the past several days, which was wrong on many levels, not the least of which was disrespect to the voters and himself. I say that with great disappointment as we supported him four years ago. Romney was suggesting Ohio consolidate their votes for Kasich and Florida consolidate their votes for Rubio not because they should be the nominee, but as a slimy, and possibly self-serving, tactic to again subvert the will of the people. And, John Kasich, among other Republican leaders pandered to the same strategy. 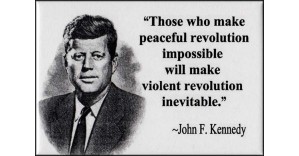 Meanwhile, the pundits deceive onward pointing to useless head-to-head polls. All of the polls and their comparisons with Democrats are useless because nominees have not been narrowed and the pollsters are using voter turnout models from past elections. But, this is no ordinary election from the past. In fact, on average the record turnouts in the Republican primaries exceed 33% over 2012. In contrast, on the Democrat side, the turnout is 20% lower than 2012. That is a 53% swing in enthusiasm and voter turnout that is not being factored into the head-to-head polling. What such turnouts also scream is that the people of this country are clearly demanding a revolution and they deserve it. Thankfully, Americans are willing to do it peacefully. But, as President John F. Kennedy noted, if you eliminate the option for a peaceful revolution, you leave probably only one option – a non-peaceful revolution. You can only subvert the will of the people for so long before they will abort the system, burn the Constitution and start over.

We hereby submit a hopeful solution that all America-loving citizens should support: Let the voters vote and live by the will of the voters. And, if you don’t like the two main nominees, vote for a third party nominee. If you can’t support such an approach in favor of subversion, you are the problem as in you are not respecting our Constitutional Republican Democracy. As Governor Mike Huckabee put it, the nomination is an election, not a selection. If you deny the option for a peaceful revolution that the Constitution affords, you advocate for something far worse.

Finally, Christian, in 1 Samuel 8, God granted the wishes of His people for a King, even though it offended Him personally since He was their King. And, God used that decision for His continued story. Who are we to advocate to deny the American people their will? Subverting the will of the people is manifested oligarchy and the polar opposite of every shade of conservatism. The central question of this election for each American is simple: Are you for the voters having their will or not? Standing for the continued subversion of the will of the voters in favor of your candidate, your party, or your wishes is not humble spirituality in action. It is self-pride.

You can purchase the book "Reason If You Will - How To Answer Questions Regarding Faith" by clicking HERE. Profits go to Camp Bahamas. You can also follow @ReasonIfYouWill on Twitter.
Posted by Tim Albury at 6:50 AM
Email ThisBlogThis!Share to TwitterShare to FacebookShare to Pinterest
Newer Post Older Post Home