In October of last year, a startling finding was published in several scientific journals regarding drug-resistant bacteria being found in Andean mummies that were over 1,000 years old (link to the related abstract is at the end of this post). This was startling because it was entirely unexpected. However, when it was suggested logically as evidence unfriendly to macro-evolution, the discussions got irrationally ugly. It is important to note that this was startling because drug-resistant bacteria are big heroes, at least significant workhorses, for macro-evolutionary dogma. That is because drug-resistant bacteria are widely held as an example of small variations or mutations in bacteria DNA over time such that they would beneficially adapt through natural selection to the extent that they would resist our modern attempts to exterminate them. But, what this archaeological discovery clearly demonstrated is that these bacteria did not evolve as advertised. Rather, they existed long before we even discovered penicillin in 1929. And, apparently penicillin did not mutate their DNA.

Such logically inferred suggestions were instantly met with accusations of scientific heresy. How dare anyone defame the man-made evolution god! Without hesitation, and certainly without discipline, the selective arguments were shouted downward until the heretics were once again silenced. The arguments raged but nobody stopped to ask why this archaeological discovery was so unexpected. After all, if what we understood about adaptation and mutations included this possibility, those arguing vociferously should have expected it to the extent that no argument should ensue. The fact that they did not expect such a finding reveals much about the selectivity of their reasoning and their arguments. The selective arguments generally took the form of condescendingly explaining adaptation separate from mutation. However, macro-evolution does not work without both working together. Ironically true adaptation absolutely fits in a creation model. But, in the macro-evolution model adaptation needs more than just adaptation. Evolution requires that adaptation and mutation work together. The problem, and well-kept secret is that they don’t. Allow me to explain by sharing the definitions of both adaptation and mutation.

In biology, an adaptation is any alteration in the structure or function of an organism or any of its parts that results from natural selection and by which the organism becomes better fitted to survive and multiply in its environment. In other words, largely through interbreeding, more species of bacteria emerge. And, the handfuls of species that ultimately are resistant to modern drugs survive and become more plentiful in a population of bacteria such that they dominate and persist. The weak bacteria, or those that are not drug-resistant, die off. Thus, this is an example of survival of the fittest. And, thus, adaptation is used to illustrate small changes over time. The problem is from this archaeological finding, adaption is just selection from among various species that already existed, not species that took long periods of exposure to evolve. In fact, drug-resistant bacteria just might have existed from the beginning of bacteria. That is a problem for those who blindly follow the blind in believing that bacteria slowly evolved into, say giraffes, over long periods of time. This is also a problem because it flies in the face of declaring that the introduction of a drug caused the bacteria’s DNA to be altered. Apparently, the DNA already existed long before 1929.

Now, let's define mutation. In biology, a mutation is a sudden departure from the parent type in one or more heritable characteristics, caused by a change in a gene or a chromosome. Adaptation works, but adaptation is not mutation. They are not synonymous. And, mutation works if the goal is to prematurely kill the organism. Adaptations are a result of natural selection among already existing species. But, mutations are not the fuel of new species, but genetically fatal species (not stronger species). Contrary to popular myth, mutations are weaker than the original. In fact, the vast, vast majority of mutations are generally fatal. When pressed to identify beneficial mutations, science is reduced to two in just the human species alone. And, both of these examples are arguably barely beneficial and definitely specious as they present fatal diseases. A fatal disease that presents a minor benefit of some obscure immunity is still a fatal disease. 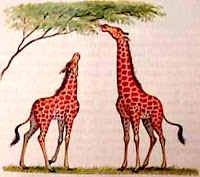 Most people just assume that adaptation and mutation either work together or they are the same thing. Neither is apparently true. A commonly used stretch from the bacteria example is that of giraffes (which is why I abruptly introduced them earlier). The example holds that long-necked giraffes survived as stronger mutations since their long necks allowed them to eat from tall trees while the shorter-necked variety died off for lack of competitive access to ideal food sources. But, there are more than a few problems with this stretch of imagination. To illustrate, let’s ask some pointed questions. Why are there no short-necked giraffes in the fossil record? Despite the lack of fossils, and assuming short-necked giraffes actually did exist, why would short-necked giraffes not find food closer to the ground? Are we to believe that all short-necked giraffes died off (without being fossilized) because they were ill-suited to survive eating greenery closer to the ground despite the fact that there are other animal species alive both then and now that survive as herbivores in like environments? We could ask a lot more questions, but over-responding to foolishness further associates the response with the foolishness it addresses. Proverbs 26:4 says, "Answer not a fool according to his folly, lest you be like him yourself."

Furthermore, there is more than just one big difference between bacteria and giraffes other than simply size. There are approximately 10,000 species of bacteria. Using bacteria as a macro-example for adaptation is convenient because there are so many species of them and they exist in such enormous quantities (3.2 million per square inch of space in a toilet bowl, for example). But, once you get out of the world of tiny, the number of known species of larger animals is much fewer and the quantities are almost non-existent by comparison. By the way, none of the 10,000 known species of bacteria are actually macro-evolutionary mutants (something other than bacteria - there are not organisms that are part bacteria and part other species). And, while there are 9 subspecies of giraffe, there is only one macro-species of giraffe. And, all of them have long necks. And, all of them thrive across the African continent in varied ecosystems.

While we are not afraid to address these errant "scientific" interpretations, we are not hesitant to adventure to offer our own. Therefore, we will offer an interpretation of what archaeology has conveniently proven for us regarding adaption by way of this recent discovery. Mutant bacteria are generally weaker bacteria, but still bacteria. The non-mutant bacteria are ideal for survival as they were originally designed to be. There are thousands of species of bacteria apparently existing long before the advent and proliferation of modern drugs. And, some of the already existing bacteria were already resistant to drugs, but we did not discover this until we later invented drugs that would challenge their non-resistant cousins (and the invention of microscopes that allowed us to observe them). And, yes, through natural selection, the non-resistant cousins die off when presented with the right drug, while the drug-resistant species survive, thrive, multiply and dominate. Yes, this is "adaptation" in that the stronger species survived. But, these stronger species did not self-alter their own DNA. Nor was their DNA environmentally re-designed by the presentation of modern drugs over time. Rather, their DNA was already designed to resist the related drugs. How is this interpretation not reasonable?

At least our interpretation is supported by both observable biology and observable archaeology. This discovery defies neo-Darwinian evolution, especially macro-evolution. This does not bode well for explaining how bacteria evolved into something other than bacteria. That is because it is probably more likely that it never did.

You can purchase the book "Reason If You Will - How To Answer Questions Regarding Faith" by clicking HERE. Profits go to Camp Bahamas. You can also follow @ReasonIfYouWill on Twitter.
Posted by Tim Albury at 7:57 AM
Email ThisBlogThis!Share to TwitterShare to FacebookShare to Pinterest
Newer Post Older Post Home