The Established Religion of Church-State Separatism 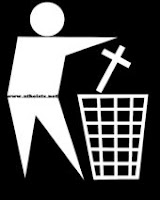 Two weeks ago, we posted regarding the growing suppression of religious freedom by way of example from the story of legal threats against a sports coach who led voluntary prayers after games. You can read that post HERE. By way of an update, as a result of his voluntary expression of faith, he was punished and put on administrative leave of absence. He was therefore reduced to attending their last season home game in the stands and not on the field. After the game he led a prayer with families in the stands. And, his players came to him for embrace and support. In case you missed it, this happened in America not China.

But, expression of faith in America is only punished in Christians, not in those opposed. For example, this week, at West Memorial Junior High School (Katy, TX), in a seventh grade reading class, the teacher administered an exam that counted for 40% of the students’ grades. In the exam students were asked to characterize the statement, “There is a God” as fact, myth or opinion. If a student did not mark the answer as “myth” their answer was counted as wrong. Students asked the teacher if they could just answer the question with what they believed. The teacher said they could … if they want to get it wrong. I wonder if this teacher will be punished with administrative leave as well. I won't hold my breath.

There is a growing problem in America of intolerance towards the free expression of Christianity under a distorted interpretation of “Separation of Church and State.” There is absolutely no reasonable basis for the notion that Constitutional Separation of Church and State means that you can’t practice your religion freely and anywhere. In fact, the Constitution absolutely guarantees that you can and should. We all agree with Constitutional Separation of Church and State. But, what that strictly means under the Constitution is that the Federal Government can’t establish a national religion nor can it suppress any individual's free exercise of their religion. A public high school assistant football coach leading a voluntary prayer after games is not and will never lead to the establishment of Christianity as our national religion. But, punishing such activity is certainly unconstitutional suppression of his religious freedom. Further, punishing middle schoolers for believing in God should frighten every rational person. Militant Church-State Separatists are having a field day banishing Christian expression altogether. And, what they are doing is deceptively ushering in the unconstitutional establishment of atheism as our national religion. Aside from this being unconstitutional, this also comes with far worse consequences - like in Communist Russia, China, Cuba and North Korea for examples.

These militant separatists fool us by forbidding every single act that is remotely cognizant of the Judeo-Christian God in our schools. All the while, every other belief, atheism included, is given a free pass. In fact, the list of openly anti-God behaviors allowed in most schools continues to grow at rapid pace. We don’t realize it because our focus is distracted away from it. To illustrate this reality, the following is a list of ways both students and teachers can openly oppose God in our schools:


That is just a few of many examples of a dangerously growing list. The zealous pursuit to remove religion has replaced religion with the establishment of anti-religion, which too is yet another religion. Therefore, we have the exact opposite of separation of church and state. But, the Constitution does not support the Federal establishment of atheism. It also does not support the establishment of Church-State Separatism. However, sadly we have a state (our Federal Government) suppressing religious freedom under the lie of neutrality. In fact, if you want to oppose the notion of God in any way, faculty or student, your right to do so is violently protected. But, this is not the case for the conscientious Christian. If a coach leading a voluntary prayer after a game is a violation of Church-State Separation worthy of punishment, isn’t also a teacher forcing atheism upon students likewise a punishable violation? If you are not allowed to advocate for God, shouldn’t you likewise be forbidden to advocate against God? Wouldn't that be neutral? If neutrality is truly the goal, we have woefully missed that target. Then again, in truth, neutrality was probably never the goal - was it?

Christian, God has an opinion on this topic as well. The Bible does not articulate a full-blown doctrine of the separation of church and state. Yet, it clearly separates the kingdoms of this world from God’s Kingdom. Jesus at least touched on the concept when in Matthew 22:21 He said regarding taxation, “So give back to Caesar what is Caesar’s, and to God what is God’s.” Jesus’ behavior was consistent with His words. It seems that He never took a coin from Caesar or sought the help of Herod in His ministry and mission. In many places, the New Testament further delineates the separate realms of the Kingdom of God and the kingdoms of this world. The church is given the tasks of spreading the gospel (Acts 1:8), teaching doctrine (Matthew 28:20), and discipling believers (Ephesians 4:11-13). The state is divinely ordained to resist evil (Romans 13:3) and keep order (I Peter 2:13-15). Although these realms sometimes overlap and clash, the New Testament bears witness to a two-kingdom world — each with separate duties and each engendering different loyalties. But, this in no way advocates for the removal of religious freedom from the public square. In fact, the vile and pagan Roman government did not support that. More importantly, God would never support that. Therefore, Christian, neither should you support that in any way, shape or form.

As a country, America has lost its way, but you don't need to lose yours. We are quickly embracing atheism as our national religion and in the public square. As we do, the violence and hatred against Christians will continue to multiply. As that unfolds as the Bible foretold, Christian, hold strong to what you believe and openly love others with prayers of hope and blessing. Serve and pray for our enemies. Share the Gospel with those God has entrusted to your path. God will have the final word. As you attempt to freely express your faith, God will come to your ultimate defense. Keep the Faith!

You can purchase the book "Reason If You Will - How To Answer Questions Regarding Faith" by clicking HERE. Profits go to Camp Bahamas. You can also follow @ReasonIfYouWill on Twitter.
Posted by Tim Albury at 7:19 AM
Email ThisBlogThis!Share to TwitterShare to FacebookShare to Pinterest
Newer Post Older Post Home