As a result of America’s failing leadership in the Middle East (largely caused by a foolishly unprecedented removal of troops from Iraq), ISIS has become a destabilizing threat to the region and now the world. Exhibit A to that conclusion is the recent attacks by ISIS in Paris, France. ISIS has not only brutally taken over large portions of Iraq, but also threatens the sovereignty of Syria and any nation that does not submit to their Sharia demands. Their bloodthirsty assault not only involves genocidal mass-executions of Christians, but tyrannical subjugation of Muslims. As a result, thousands upon thousands of refugees are streaming out of Syria into Europe creating a refugee crisis that must be addressed. Unfortunately, our leadership’s first response is to continue employing divisive tactics at home that logically jeopardize our national security even further. Today, America reluctantly decides to lead – and when we do, we tend to lead against our own interests. The latest divisive tactic is to guilt the American people into importing thousands of Syrian refugees in spite of the numerous current examples of ISIS jihadists infiltrating refugee ranks. In addition, our most recent terrorist attacks in America and in Paris were plotted and carried out by Muslim refugees. Instead of working together in leading our people to address the crisis with appropriate leadership, the administration is wasting energy on distracting away from what we can agree to do, into dividing us over what we might be very unwise in doing. Ironically, some Christians are joining in employing a similar tactic.

The divisive tactic used in this political debate is the Logical Fallacy referred to as the Faulty Dilemma or Either/Or thinking. This is when one side tries to win the argument by manipulating the other side through guilt or conviction through falsely making them choose between one of only two options that the manipulator has pre-selected. In this case, either you agree to import these refugees or you are being a bad American, or a bad person, or even a bad Christian. The problem is that there are almost always more than just two options. And, as is the case in this refugee crisis, there are even more than just one right option – there are several right or Christian options.

For example, one alternative option is for us to care for, house, feed, and sustain refugees in “safe zones” in their own region. This is the most prominently used model throughout history and can be accomplished through diplomatic yet forceful negotiations with our allies. And, the most wealthy of nations are those in the region who are also Islamic. We can finance this through diverting American foreign aid away from Iran, inspiring individual contributions, and/or advancing the activities of the church and para-church organizations like Samaritan’s Purse (already assisting these refugees). Such a solution would also be much more frugal than transporting refugees here. To those who are focused on convicting others via the false dilemma, how is this alternative option any less Christian, moral or American than the one for which you advocate? To my Christian family, we should not be engaged in publicly dividing Christians via guilt inspired through a false dilemma. Here is a clue: if a politician is advocating for something by employing guilt over two options, don’t join in – they are probably deceiving us. Politicians are rarely motivated by the Holy Spirit as evidenced by their intent to divide. As Christians, we don’t take our cues from politicians who distort the scripture narrative. Instead, let’s pray and individually obey the Holy Spirit on the matter. And, to our non-Christian friends, don’t invoke the Bible on any one issue unless you are prepared to be invoked by it on other issues. You should refrain from manipulating via Christian narratives if you are offended when the favor is returned. 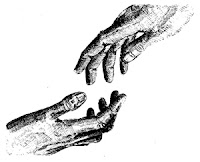 That brings us to the narrative that is being distorted in this case - the parable of The Good Samaritan (Luke 10:25-37). Aside from the problem of a politician being the last person who should invoke the Good Samaritan narrative (a.k.a. the proverbial “pot calling the kettle black”), that narrative was never meant to apply to nations. Jesus shared this parable with individual followers to implore us individually to love our neighbor, especially neighbors who hate us for religious and/or ethnic reasons. But, that does not give us a pulpit to browbeat those who disagree with us. If the parable is to be a bully club, it is to be self-inflicted, not inflicted upon others. We were never asked by God to manipulate political agendas by way of wrenching His word into a venue for which it was never intended. Rather, we are called to inspire our fellow brothers and sisters to join us in following Christ in His teachings. That does not take the form of guilting others into supporting a politically motivated faulty dilemma. It takes the form of personal service that inspires other to join you. In other words, if you feel convicted by the Holy Spirit to help refugees, then you should help refugees. Publicly cajoling Christians into supporting political gambles is not faithful to the parable. Actually, individually serving refugees is.

We can be Good Samaritans without risking the lives of others. The big problem with advocating for bringing refugees here is that we are called to risk our own lives, not risk the lives of others. It is one thing for me to risk my life for refugees, but wholly different to advocate the risking of the lives of other American families/children against their wills. God never calls us to do that. It is a 100% likelihood that among any group of refugees from Syria, there will be ISIS jihadists. In fact, many have already been arrested among the refugees. And, innocent Americans have already died at the hands of refugees in recent months. If we import them, innocent women, children and men will die. Christian, that is acceptable if it is you and me who die. But, we have no right to impose such risks on others. That is precisely why we as Christians should probably not use scripture to guilt the nation into dangerous options that were meant for only us to take individually and as a Church. By the way, if you advocate for the separation of Church and State, you should be applauding right now.

One last point is regarding our motives. We should love and care for refugees without condition. And, if we desire for them to hear the gospel, America may not be the best place to transport them. After all, if this is done under the dictates of our current government, it is more likely that the present attitude towards censoring Christians will be the rule, not the exception. This government and the nation-at-large, seems to be very unsupportive of free speech for Christians when taxpayer dollars are even remotely involved. We will be much more able to openly share the gospel (the deepest expression of love and care) through humanitarian effort in their region than we can here at home. That is a sad admission, but fairly reasoned.

In summary, we can mobilize and care for refugees in their own region without opening our borders up for ISIS to take advantage. To Christians who have strong conviction on the matter, you are joined in praising God for your conviction. And, be encouraged to channel that conviction into personal action through personal sacrifice and/or service. In other words, do something about it. Convicting others is not doing something – unless unnecessary division was your goal. After all, not all Christians are called to serve these refugees. Regarding division, 1 Corinthians 1:10 implores us, “I appeal to you, brothers, by the name of our Lord Jesus Christ, that all of you agree, and that there be no divisions among you, but that you be united in the same mind and the same judgment.” Now, go and be strong in obeying your conviction personally. But, your first conviction with spiritual family must be unity.

You can purchase the book "Reason If You Will - How To Answer Questions Regarding Faith" by clicking HERE. Profits go to Camp Bahamas. You can also follow @ReasonIfYouWill on Twitter.
Posted by Tim Albury at 7:46 AM
Email ThisBlogThis!Share to TwitterShare to FacebookShare to Pinterest
Newer Post Older Post Home