When Life Begins …and Ends?


A few weeks ago the Fox News Channel hosted and moderated the first Republican 2016 Presidential debate. The saddest theme of the debate was the incredulous drilling of the candidates over their pro-life views. This was profoundly sad since the weeks leading up to the debate were marked by the revelation of several undercover videos that undeniably exposed the barbaric activities of Planned Parenthood whereby they admitted to illegally harvesting whole organs from live babies in the womb which they actively sell for cash (see separate related post on this subject HERE). A reasonable person might think that this grotesque injustice would be a much more germane topic from which to grill candidates of all political stripes. But, of course, in our depraved culture, no such grilling occurs. Rather, we deem it more important to grill candidates about a fictitious “war on women” while babies (including female babies) continue to be slaughtered at a breathtaking pace. 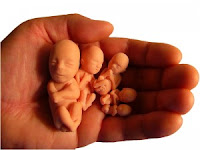 During the week that followed this debate, CNN’s Chris Cuomo interviewed Republican candidate, Marco Rubio, on the same subject. Aside from the glaring fact that Cuomo came off like a blood-bent apologist for Planned Parenthood, Rubio in his faithfulness to human life was brilliant. When Cuomo personally attacked Rubio as “backwards-looking,” Rubio responded, “The value of life is timeless. The idea that a human life is worthy of the protection of our laws is not something that over time anybody should evolve on.” This pressed a button in Cuomo – a button marked “START SHOUTING LIBERAL EPITHETS THAT MAKE NO SENSE UNTIL YOUR OPPONENT BACKS DOWN.” In the end, Cuomo exposed his bias by shouting repeatedly, “Science has not decided [life is] at conception!” To which Rubio calmly declared, “Absolutely it has.” Has science decided when life begins? If so, has science declared what they have decided about when life begins? Then again, does science get to decide? Or, does that honor belong exclusively to the Author of life?

Well, science has actually spoken in defense of what Rubio said and 100% opposed to what Cuomo said. To that end, LifeNews.com published an article on January 8, 2015 revealing exactly what science has declared about when life begins. They lifted 41 quotes from medical textbooks. That’s right, not just a few quotes but 41 quotes, and from the medical experts that author the textbooks that train our country’s physicians. I won’t copy them all in this post, but you can read each one and their specific reference HERE. I will share one example from “The Developing Human: Clinically Oriented Embryology”, 7th edition. Philadelphia, PA: Saunders, 2003. pp. 16, 2: “Human life begins at fertilization, the process during which a male gamete or sperm (spermatozoa development) unites with a female gamete or oocyte (ovum) to form a single cell called a zygote. This highly specialized, totipotent cell marked the beginning of each of us as a unique individual…A zygote is the beginning of a new human being (i.e., an embryo).” And, there is so much more from where that came. Please check out the article and be encouraged that Chris Cuomo and the rest of the deceiving liberals are lying to all of us. Science has spoken very clearly, explicitly, and conclusively that human life begins at conception.

So, with that obvious fact behind us, unfortunately that is only half of the battle. The other half of the battle is determining when life ends. For a telling analogy of answering that question poorly, we should turn to Nazi Germany. The core problem with Hitler’s Nazism is that Hitler (a man) presumed the role of God in determining when life must end, even for the innocent. And, in his gas chambers and concentration camps it is estimated that the human carnage of Jews alone was approximately six million souls. Hitler played God in determining the end of six million innocent lives. This was genocide. This was murder. This was the result of a total devaluing of human life. But, we are worse – far worse than he. In America alone, we are committing the same error. Instead of one man playing God, we are all playing God - and we have ended the lives of over 50 million innocent babies.

The spiritual problem with abortion is that innocent human life is killed by one of us. It is one thing for a murderer to be executed by the State or for someone to be killed in war. It is wholly another for a third person to decide to end the life of an innocent human being via our healthcare system. There is no comparison at all. And, the twisted moral determination behind this is predicated upon our human answers to both questions of when life begins and when life ends. And, we have poorly answered both questions. We know the obvious science that clearly, explicitly and undoubtedly states that human life begins at conception. Yet, we are lying about this fact by shouting that it doesn’t. Then, on the basis of that lie, we insert our hands and knives into mothers' wombs and brutally and fatally mangle innocent babies. In so doing, we have used our lying answer of when life begins to cover up our willful, self-idolatrous determination of when these innocent babies' lives must end. And, here is where we are more than doubly worse than Hitler. Hitler only decided to play God in answering the second question. We have played God in answering both. And, in barbarically botching both answers, we proceed to genocidally mutilate over 50 million bearers of God’s image. We foolishly assume the role of God to repeat the symbolic ritual of destroying that which bears God's image. How twisted is that?

It is one thing to reject the Bible and align with our barbaric displays of human depravity. It is beyond comprehension for one who believes in God to so align themselves. In Genesis 9:6 God says, “Whoever sheds the blood of man, by man shall his blood be shed, for God made man in his own image.” And, this is repeated in the New Testament. And, in Jeremiah 1:5 God says to Jeremiah, “Before I formed you in the womb I knew you, and before you were born I consecrated you.” The two questions that open this post are interesting to ask anyone, including Presidential candidates. But, only God has the right to answer them. And, He did not delegate that right to anyone, including you. But, Christian, if your answers and actions align with abortion as a means of birth control, you are aligned against God, in the place of God, and in favor of the destruction of the image of God as displayed upon those who are the most innocent of us all. Christian, if that is you, repent before it is too late.

You can purchase the book "Reason If You Will - How To Answer Questions Regarding Faith" by clicking HERE. You can also follow @ReasonIfYouWill on Twitter.
Posted by Tim Albury at 7:22 AM
Email ThisBlogThis!Share to TwitterShare to FacebookShare to Pinterest
Newer Post Older Post Home