Starbucks and Free Speech For All


Last week, in the wake of race-related current events, the CEO of Starbucks announced that their baristas were newly instructed to label customers’ cups with “#racetogether” in order to spark discussions in stores about racism. Given the leftist/activist agendas of previous statements from their CEO, this too was likely bent towards an ill-founded means rather than a race-unifying end. However, a week later, the CEO announced the termination of this initiative due to various reasons, not the least of which was likely customer dissatisfaction.

Before this initiative was terminated, however, the leftists were rigorously defending Starbucks and their CEO primarily on the grounds of freedom of speech. In other words, Starbucks and its CEO were both recognized for enjoying free speech under the Constitution. And, here is where we should all agree. Yes, the CEO and Starbucks both have the freedom of speech under the Constitution to launch this initiative in every store. But, since that is the case, what did the leftists just admit, and thereby hypocritically refuse to admit?

By defending Starbucks’ free speech, what did the leftists just admit and hypocritically refuse to admit? They admitted what the courts in our country (including the Supreme Court) have held since our Founding - Corporations are organizations that represent people, which therefore are extended the rights of the individuals that they represent. In other words, corporations have Constitutional rights. And, what did these same leftists also hypocritically refuse to admit? They refused to admit that these same freedoms apply to all corporations. If Starbucks has these Constitutional rights, then why did the defenders of Starbucks vehemently seek to deny these rights to Hobby Lobby? Why did they oppose Chick-Fil-A? Why are they now opposing Christian bakers, florists and photographers? Don’t these corporations and individuals have the same Constitutional rights as Starbucks and its CEO? Well, therein lies the rub. If you admit that Starbucks has these rights, you have no other choice but to admit that all corporations do. And, that is the correct conclusion. Starbucks does have these rights. And, so does everyone else, including and not limited to Christians and their businesses. If you seek to defend Starbucks' rights but deny Christians' rights, you are part of the bigger problem. And, that problem should be addressed in what we should be discussing. If freedom of speech is not for all, then it is not freedom after all.

In fact, Starbucks as well, is part of the problem. While Starbucks flexes its rights, it aggressively opposes the rights of Christians and gun-owners – who share the same Constitutional rights as Starbucks. If Starbucks wishes to facilitate genuine conversations regarding the protection of rights under the Constitution, they need to stop opposing the clear Constitutional rights of others. And, if anyone else advocates to have these same rights, they need to defend the rights of everyone else in the process. If you don’t, then you are just as guilty of the worst form of hypocrisy as recently exhibited by Starbucks. And, that would make you part of the problem, not part of the solution. By the way, your freedoms will be threatened next. 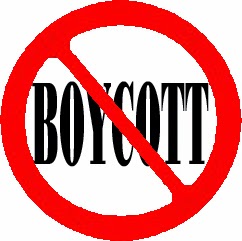 While Starbucks is actually part of the problem, we Christians should still avoid advocating for public boycotts in retaliation. It is perfectly acceptable for an individual Christian to react in a manner that takes their wallet to other purveyors of coffee. But, we as Christians should not seek to publicly organize in order to punish those who hold opposing views. It is one thing for an individual to make a personal buying decision on moral grounds. It is yet a darker thing to launch a public boycott in the name of Jesus (who never modeled or called us to such action). The first is a personal and private decision that honors God. The second is an effort to punish and take God's place in the public light. Christian, we must never covet the punishment of others, especially not by our own hands. That is for God and God alone. Romans 12:19 clearly repeats the Old Testament by saying, “Beloved, never avenge yourselves, but leave it to the wrath of God, for it is written, ‘Vengeance is mine, I will repay, says the Lord.’” Could this be more clear?

Further, God is also crystal clear on racial unity. Malachi 2:10 says, “Have we not all one Father? Has not one God created us? Why then are we faithless to one another, profaning the covenant of our fathers?” Acts 10:34-35 says, “Truly I understand that God shows no partiality, but in every nation anyone who fears him and does what is right is acceptable to him.” Galatians 3:28 says, “There is neither Jew nor Greek, there is neither slave nor free, there is no male and female, for you are all one in Christ Jesus.” And, Revelation 7:9-10 sums it up regarding our destiny in Heaven, “After this I looked, and behold, a great multitude that no one could number, from every nation, from all tribes and peoples and languages, standing before the throne and before the Lamb, clothed in white robes, with palm branches in their hands, and crying out with a loud voice, ‘Salvation belongs to our God who sits on the throne, and to the Lamb!’” God is painting a beautiful masterpiece - a Bride - that is comprised of every race.

The truth is that there can be no beneficial discussion on race unless God’s opinion is central. Yet, imagine with me what would happen if God’s words were spoken in the midst of such discussions. Actually, in light of current events, imagination is sadly unnecessary. God's children sharing God's words are no longer afforded the same rights in the same venues as those who oppose Him are afforded? And, that is the worst form of unconstitutional inequality.

In conclusion, we are not called by God to carry out His vengeance. We are called to love and share the amazing Gospel of Jesus Christ to all races. After all, it is the Gospel and the Gospel alone, in which all races will be united. The greatest thing we can do as humans to establish true and lasting racial unity and equality is to surrender our views and our wills to the Creator of every race - who is also the One who died to save them all.

You can purchase the book "Reason If You Will - How To Answer Questions Regarding Faith" by clicking HERE. You can also follow @ReasonIfYouWill on Twitter.
Posted by Tim Albury at 7:10 AM
Email ThisBlogThis!Share to TwitterShare to FacebookShare to Pinterest
Newer Post Older Post Home