If You Truly Want To Fight…


In almost every example, wars are only won when one side conquers the power source or nucleus of the other. While the front line battles help to stop the advance of the other party, the war is only won by killing the source. Therefore, those intent on winning must have a strategy that targets the nucleus of its enemy. Otherwise, our energy is wasted on fringe battles while losing sight of the war at large. This same dynamic is currently at play in America between those who seek to fight the individual moral battles of our day on the battle lines that are drawn, while ignoring the power source that lies beyond the battle lines. If you truly want to win the war, you can’t be content with winning an individual struggle while the main enemy remains intact. After all, that is only a temporary victory because the strength that your enemy lost can easily be regained.

Law in human society is “a system of rules that are enforced through social institutions to govern behavior.” From this definition, laws are meant to govern morality not redefine it. Laws are only meant to prevent people from doing that which the majority deems immoral and worthy of imposition of law. The notion of laws is not meant to prohibit trivial freedoms that the majority do not see as immoral. Therefore, what does it suggest when the behaviors that social institutions govern are morally trivial? What if laws are passed to govern a behavior based upon assumptions of morality for which there is no consensus of the governed? What does it suggest when politicians and lobbyists attempt to force their assumptions without consensus? What does it suggest when the minority seeks to force the majority from freely doing things that only the minority deem immoral? It more than suggests an oppressive Government that acts against the will of the Governed. 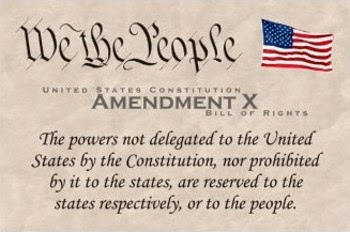 By the way, the broader answers to all of the above questions should be obvious. When we allow our Federal Government to write laws that redefine morality in terms that the governed do not consent to, the few who are forcing such laws become the rulers, and not the law itself. Then the law becomes a tool of the few to subject the many under the oppression of immorality. For example, should my “carbon footprint” be regulated? Is my carbon footprint immoral? Is man-made climate apocalypse true? Even if it is, should the Federal Government be delegated authority to restrict our freedoms to drive certain cars, recycle a certain way, and steal our alternative forms of energy? Are we willingly surrendering our God-given authority over the earth and our individual decisions to the god of the “secular elite” and their unsupported faith deceptively labeled as science? How is it more immoral for me to drive an SUV than it is to sanction the killing of 50 million unborn children? Has mankind lost its mind? When will the governed begin to govern again? When will we return to the rule of law? Will we really allow a few corrupt and fallen humans to rule us against our will? Or should the consensus of the governed authorizing the passage of law consistent with our Constitution be our guide? When will it be too late?

Now that our nation has almost entirely turned its back on God on the vast majority of social issues; now that we have turned over the definition of morality to perversion; now that we have submitted our morality to the glorification of murder, sexual debauchery, and generational theft; maybe now is the time to stop fighting those wars and instead dismantle their power source – Government itself. Maybe America needs a spiritual awakening and a return to the rule of the “States and the People.” Maybe now is the time to remove the cancerous tumor of Federal Government and the disgraceful centralization of corrupt power of man.

For the Christian, whether this happens or not, eventually it all ends in the same outcome: “Every knee shall bow!” We know how this story ends no matter which road we take. However, by continuing to fight for that which is beyond lost, are we distracted from fighting something that is much more hideous and at the nucleus or power center of what we fuels the fight in the first place? What gives the secular elite the power to do what they do is the power of the centralized Federal Government. Maybe instead of fighting the individual battles that this monster’s tentacles carelessly rage, we should start killing the monster. After all, without the Federal Government and all of its unconstitutional power, we can more effectively wage a more effective war over our culture and the souls within it. And, the fight to dethrone this beast is moral. After all, at the point of guns, she takes our taxes and forces us to pay for the killing of unborn children. I say, “Off with her head!”

Don’t get me wrong, I don’t prescribe fighting a culture war over the war for souls. God's Kingdom is first priority. However, we as responsible Christians will exercise our stewardship over voting and reasonable political engagement. As we do, we should not let politics consume or distract us. However, as we do, we should also do so morally. The Democrat party and the Republican party are the same in this – they are both entirely corrupt. And, regardless of what either party claims, Jesus is neither Democrat nor Republican. Jesus is a King who presides over a Monarchy. And, in America increasingly the largest force that stands between God and lost souls is an overpowered Federal Government that seeks to persecute Christians, silence the Bible, regulate the Church, punish thoughts, and ultimately distort Christian evangelism into hate speech.

While I am undeterred from open passion for Jesus Christ regardless of Government threat, my vote and my political engagement will either consent to it or not. Are Christians actively consenting to Government perversion without realizing it? Are we fighting for political parties without realizing that they both oppose God? Are we continuing to plow energy into lost fights when that energy can be better spent in slaying the giant? If you truly stand for “power to the people” then you need to start voting like it. You need to start speaking like it. And, you need to more passionately start loving like it.

In conclusion, the power of God is the Gospel (Romans 1:16). And, the power of God’s people is in the advancement of that Gospel. This is our calling. As we answer the call, let’s be truly aware of what it means to be a good steward of our Government (i.e. our dominion). After all, you may be sharing the Gospel while you vote against it. Stewardship of this earth will not take the form of managing our carbon footprints. True stewardship of the earth can only take the form of keeping our Government in check with God’s authority, humbly ruling over our dominion without domineering, and fostering the freedom of man as God did “In the beginning.” Are you for freedom or do you stand against it? By the way, God is for it, so choose wisely.

You can purchase the book "Reason If You Will - How To Answer Questions Regarding Faith" by clicking HERE. You can also follow @ReasonIfYouWill on Twitter.
Posted by Tim Albury at 9:37 AM
Email ThisBlogThis!Share to TwitterShare to FacebookShare to Pinterest
Newer Post Older Post Home