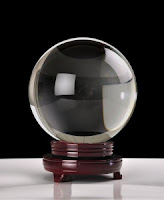 Most people desire, sometimes earnestly strive, to know or determine their future. To illustrate, if a crystal ball promised to give you a clue, would you be remotely tempted to read it? Yet, we have in our possession something much more reliable on that subject than crystal balls - more reliable than anything else known to man. That "something" is God's word (the Bible). As you read this, you need to know more than anything how much God loves you. His will is that everyone would believe in faith that He sent His one and only Son, Jesus Christ, to willingly suffer and die on a cross, to pay your sin debt (disobedience to God’s will). He did this out of His great love for you. And, He desires to give you a future that only He can deliver - eternal life with Him through His Grace (undeserved favor) and Mercy.

Only God knows your future because He created all things (Genesis 1) and carries out His plan. And, there is a verse in God’s Word that summarizes your future if you will believe in Jesus Christ and seek to live for Him; it also summarizes your future if you don't. John 3:36 reads, “Whoever believes in the Son [Jesus Christ] has eternal life; whoever does not obey the Son shall not see life, but the wrath of God remains on him.” To further elaborate on this, below are more excerpts from the Bible (ESV [emphasis added]) that reveal both futures.

Your Future If You Believe:

When you believe in Jesus Christ, who paid your sin debt by dying on the cross for your past, present, and future sins, God forgives your sins and writes your name in the book of life in Heaven, which is your future.


Your Future if You Don’t Believe:

According to God's Word, if you don’t believe, your name will not be written there. God's Word tells us that on the Day of Judgment (after He comes back and later judges the world), if a person's name is not found in the book of life, that person will be thrown into the lake of fire forever. This is called the second death (the one after physical death). No matter what we may wish or think, this will happen according God’s Word.

How can you have your name written in the book of life, be saved from Hell, and live in Heaven with God for all eternity? Simply by believing in Jesus Christ who paid your sin debt by dying on the cross and rising alive from the grave.
Simply pray, sincerely asking God to forgive you for your sins and place your trust in Jesus as your Lord and Savior. Then, follow Him by telling others who He is and what He did for them. Click HERE to learn more about this simple prayer.

How to be Sure that You Believe:

You can purchase the book "Reason If You Will - How To Answer Questions Regarding Faith" by clicking HERE. Profits go to Camp Bahamas. You can also follow @ReasonIfYouWill on Twitter.

Posted by Tim Albury at 7:32 AM
Email ThisBlogThis!Share to TwitterShare to FacebookShare to Pinterest

He Appeared and the Soul Felt Its Worth


Have you ever heard the phrase, “You get what you pay for”? It is usually meant to imply that if you purchased a certain brand because it required you to pay less, then you usually get lesser quality. But, does the phrase also work if you pay more than the known price? There is a story that I have never been able to confirm about an island in the Pacific where long ago, men had to purchase their wives with a dowry in the currency of cows. The normal rate was three cows for a wife. If the woman were very special, she might draw a dowry of four or five cows. On this island, there was a father of two daughters. The younger daughter was very beautiful and the older was more rejected by society. The father was almost willing to even give the older daughter away just to save him the burden. When a very rich man came to call on one of his daughters, the father assumed it was his younger and more beautiful daughter. Instead, the rich man came to call upon the older daughter for which he ultimately paid an unprecedented dowry of eight cows. The price was so high that it became a famous, almost scandalous story. They were quickly married and left for their honeymoon. Upon their return from the honeymoon, everyone was shocked at how beautiful and happy she now looked. She looked so amazing that the father felt cheated because she was now clearly worth ten cows and not just eight. She was from that day forward reverently and affectionately known as the "ten-cow woman". Even in cases like this, maybe you do get what you pay for?

As we bask in the glories of what we celebrate at Christmas, there is no line that touches my soul and brings me to tears more than the line from “O Holy Night” which goes, “Long lay the world in sin and error pining, ‘til He appeared and the soul felt its worth.” Never has there been a time in history that something of such low value was immediately made so priceless. God paid the dearest of prices for your dowry - He paid His only Son. In any business transaction, the value of something is determined by what an objective third party is willing to pay to obtain it. When God decided to pay for you with Himself serving as the currency, He thereby determined your value. Your soul went from being worth next to nothing to being the most valuable thing in all creation (John 3:16). There is nothing created that is of higher value and worth than you (Matthew 6:26). This is what the mystery of God taking on flesh means to us personally.

As a follower of Christ, I am called to love everyone. I believe that if I had to take a bullet to spare someone else, even a stranger, I would do it. In that light, I would die for anyone. But, like God, I too have only one biological son. And, I love my son more than I love myself. I believe I can take a bullet for anyone. But, I don’t think I love anyone enough to kill my own son for them. I will never understand the passionate depth of that kind of love. And, I can’t fathom that kind of value being placed on anyone other than my son. For this reason, God’s love for me (and you) wrecks me in a very good way. It reduces me to tears of joy that I can’t fully understand. The world woefully attempts to understand love, which seems to always be in varying forms all of which seem to be conditional. But, there is no such love except that which God paid for us beginning in Bethlehem unconditionally. You see, Jesus was sent by His Father and He willingly came to Bethlehem with the cross as the determined destination. Jesus came to die for you and me that we might live with God forever. He asked for nothing in return - just believe, receive and let it overflow to others. And, that is what Christmas is all about. This year, when you ponder the manger, fall on your knees and hear the angels’ voices because there is nothing more amazing in the history of everything than the gift of God that came through the virgin, Mary.

At Christmas we celebrate the beginning of Easter – the coming of the Lamb that takes away the sins of the world. He came to pay the price for you that only He could afford to pay. No other religion bears such remarkable, simple and profoundly perfect truth. No other religion attributes to the every human soul such immeasurable value. You are worth to God the price of His only Son. That is what He paid for you. That is what you are worth. Christian, do you live as if that is your worth?

As you walk through this Christmas season, and the days that follow, live according to the level of your worth. Bless others radically as you have been blessed by the Christ child. May others see you and be utterly amazed at how beautiful and happy God has made you. Be the hands and feet of Jesus for all that God brings into your path. Christian, the Holy Spirit (God) resides in you, which is a practical image of God taking on flesh even today - made possible by the greatest Christmas gift of all, Jesus the Messiah. Therefore, may those you intersect with be made fully aware by you of what their souls are truly worth.

You can purchase the book "Reason If You Will - How To Answer Questions Regarding Faith" by clicking HERE. Profits go to Camp Bahamas. You can also follow @ReasonIfYouWill on Twitter.
Posted by Tim Albury at 8:04 AM
Email ThisBlogThis!Share to TwitterShare to FacebookShare to Pinterest
Newer Posts Older Posts Home
Subscribe to: Posts (Atom)