There is a famous yet unsubstantiated story about a naval ship losing its bearings off the coast of Canada (it at least belongs in the ranks of urban legend). As the story goes, the ship was a member of the US Naval fleet that had lost its bearings due to an electric storm. They saw what seemed to be another ship headed on a collision course with them. The captain of the Navy ship contacted the other party (Canadians) on the radio and proceeded to have the following conversation:
This funny story illustrates what can happen when even a sophisticated naval ship loses its bearings. A ship losing its bearings like this can be funny, however potentially dangerous. And, this reminds me of a more dangerous example of a proverbial ship that has lost its bearings today. That ship is America, and she is on a collision course with a wrathful and almighty God that, like a lighthouse, will not move. 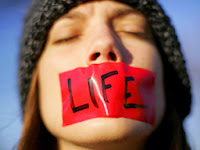 For example, effective August 22, 2014, the state of California’s Department of Managed Health Care ordered all insurance plans to immediately begin covering elective abortion. By the way, “elective abortion” is not Plan B or contraception. Elective abortion is the surgical dismemberment of a baby while in the womb, including up to full term (and on demand). Churches all across California received notices that they will be forced into covering elective abortions (in violation of their consciences). It is bad enough to force Catholic churches to pay for contraception in violation of their consciences. Now all churches in California are being required to pay for the murder of unborn babies. In summary, California churches must fund murder or else. Is anyone truly surprised?

This glaring hypocrisy of the American left was birthed by the famous case of Roe v. Wade. In the days during and following, Christians were mocked and lectured to by the leftist elite who were baptized in the hedonism of the 1960s, followed by a rise to powerful positions that determine the course of public education even today. They lectured us that we can’t legislate morality while they marched down the hypocritical path of shoving their morality down our throats. And, with every decade since we have attempted to put wise limitations on this evil only to be personally trashed as sexist haters of women by the likes of those who declare themselves "tolerant." Then came Obamacare, passed fraudulently, with all verbal assurances that we will never force taxpayers to pay for abortions. And, in four short years the deceptions (a.k.a. lies) have given birth to a culture marked by death of innocent children paid for by you and me against our will. And, as we lift up our Constitutional cries for religious freedom (the first of true civil rights and liberties) we are now accused of waging a war on women.

With that backdrop, we have some questions for the devout left. Who is legislating morality now (or rather immorality)? Who is advocating now for the killing of unborn females against their wills? Who is guilty of the worst brand of sexism (a brand that is forced)? Who now preaches that it is immoral to oppose abortion and that we must punish those (even churches) who dare to freely express their religious opposition? Which is more immoral, to kill babies or to oppose the practice? Which should be punished, the killing of babies or peacefully attempting to prevent it? What is wrong with America for her to lose her bearings so badly that we would punish a church for refusing to pay for murdering babies? America, have you lost your mind? Yes, America is worshiping a god of upside down morality. She is sacrificing her children on an altar that sails on a collision course with a Rock that will break her into pieces.

On that point, the Bible has its own proverbial examples of collision courses with The Rock. 2 Samuel 22:32 says, “For who is God, but the Lord? And who is a rock, except our God?” Deuteronomy 32:4 says, “The Rock, his work is perfect, for all his ways are justice. A God of faithfulness and without iniquity, just and upright is he.” And, in Matthew 21:42-44 Jesus says, “Jesus said to them, ‘Have you never read in the Scriptures: ‘The stone that the builders rejected has become the cornerstone; this was the Lord's doing, and it is marvelous in our eyes’? Therefore I tell you, the kingdom of God will be taken away from you and given to a people producing its fruits. And the one who falls on this stone will be broken to pieces; and when it falls on anyone, it will crush him.’” If history is a good teacher, it is not difficult to see that this collision course will not end well for the USS America. There has never been a nation who made the killing of children sacred, that ultimately prospered. Every such kingdom has fallen without exception, and in spectacular fashion. But, there is still hope in a better Kingdom.

Christian, I will close with the immortal words of encouragement from Jesus Christ, our God, Lord and King: “Do not fear those who kill the body but cannot kill the soul. Rather fear him who can destroy both soul and body in hell.” “What I tell you in the dark, say in the light, and what you hear whispered, proclaim on the housetops.” “You will be hated by all for my name's sake. But the one who endures to the end will be saved.” “I have said these things to you, that in me you may have peace. In the world you will have tribulation. But take heart; I have overcome the world.” “Now when these things begin to take place, straighten up and raise your heads, because your redemption is drawing near.”