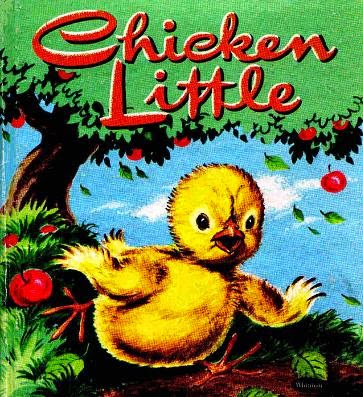 The famous story, “Chicken Little,” has several versions with varying endings. However, the most common version of the story revolves around the concerns of a little chicken that believes and warns that the sky is falling as a result of an acorn falling on his head. The chick decides to tell the King and on his journey meets other animals which join him. Ultimately, a fox entices them to his lair and eats them all. The ultimate moral of the story is that you should not believe everything that you hear, especially from irrational doomsday prophets. An even more dire moral is that there is always an unintended fatal result for those who seem to mean well at the selfish expense of others.

This brings me to Al Gore. Seven years ago, Al Gore, like Chicken Little, publicly and irrationally predicted that the Arctic ice cap “could be completely gone” by now. Actually, just in case you suspect that I am taking his words out of context, here is his entire quote back in 2007 as he accepted the Nobel Peace Prize for his work campaigning on climate change: “The North Polar ice cap is falling off a cliff. It could be completely gone in summer in as little as seven years. Seven years from now.” The inconvenient truth, however, is that the exact opposite has happened. In fact, as I wrote in my posts "'Settled Science' = Oxymoron" and "Convenient Truths on Climate Change" the ice caps have grown to record levels. In light of what we now know, if Gore were a character in the story of “Chicken Little” would he be the chicken, the fox, or both? Regardless, here are some related news articles just published this Summer that continue to bode poorly for Gore’s irrational prophecies:
Those are just a few of the findings just from this summer that make fools of the climate prophets. Sadly, in spite of this foolishness, there are those even in the Church that still join the chorus of these false prophets. Some have cited verses in the Bible that speak to climate catastrophe. A favorite is from 2 Peter 3:7, 10-12 which says, “But by the same word the heavens and earth that now exist are stored up for fire, being kept until the day of judgment and destruction of the ungodly…But the day of the Lord will come like a thief, and then the heavens will pass away with a roar, and the heavenly bodies will be burned up and dissolved, and the earth and the works that are done on it will be exposed. Since all these things are thus to be dissolved, what sort of people ought you to be in lives of holiness and godliness, waiting for and hastening the coming of the day of God, because of which the heavens will be set on fire and dissolved, and the heavenly bodies will melt as they burn!”

The atmospheric fire that the Bible prophecies of is one by God’s own hand, not man’s. In fact, in this passage from 2 Peter it states that this will come upon us “like a thief.” That is not a gradual happening, but a sudden event without warning. This passage also contains a hidden promise. The heavens and earth are “stored up for fire, being kept until the day of judgment and destruction.” That means that God is protecting our planet until He decides to no longer protect us…protect us from His wrath, not ours. Therefore, it is arrogant of man to believe that we can do something to thwart God’s purpose in this.

While we should be good stewards of God’s planet and every gift that God gives us, this should never translate into arrogant worship of human power. Rather, all such worship should be reserved and radically displayed towards the One who created it all, promises to protect it all, and solely has the authority and capability to destroy it all. And, in case you are wondering, that is precisely what He is going to ultimately do. Therefore, I will join a different chorus imploring all readers to get ready! However, by "get ready" I implore us to love radically in the hours that remain.