Most people know that England has a Queen (monarchy). And, most people know that England also has a Parliament (democracy). But, most people have no idea how a monarchy can operate democratically. England operates under what is called a Constitutional Monarchy. A Constitutional Monarchy is a form of democratic government in which a monarch acts as a nonpolitical head of state within the boundaries of a constitution. It is a fusion of monarchy and democracy. In the case of England, this means that the publicly elected Parliament makes the rules and the Queen rubber stamps them. And, practically speaking, her rubber stamp is virtually automatic. However, this is a dynamic where ultimately, the people make their request on how to be governed and seek the approval of the Monarch. This may work in England, but not so with God.

God is not a member or advocate of any political party because He is a monarch, in fact the Ultimate Monarch. He is the “King of kings and Lord of lords.” That means that in His Kingdom, He makes all the rules and there is no publicly elected legislative body, like Parliament. In God’s Kingdom both now and in the future, there is no shred of democracy. There is no government by the people and for the people. Rather, there is only government by God and for God. It just so happens that in God we also have the ultimate example of benevolence towards His subjects, so much so that He even adopts us into His royal family. But, that does not change the dynamic that between Him and us there will never be negotiation as we see in other forms of government here on Earth. With God, there is no such thing as negotiation. In fact, it is not even His way or the highway. In reality, it is only His way, period.

A good illustration of negotiations is when a vendor contracts with a homeowner to perform work on their house and they haggle between each other over the price. At first, the vendor lists out a quote of services and how much labor and materials will be consumed. This quote is then submitted to the homeowner who typically responds with a lower counteroffer. They go back and forth with more counteroffers until they settle on a price. Then they sign a contract between each other that governs the work that will be performed and how the price of the contract will be paid to the vendor. Typically, both parties then sign the contract. This works well between one man and another. However, this is no way to approach God.

Today, how many Christians approach God with a list of the desires that they want fulfilled in their lives in order to seek God’s blessings upon their requests? This is entirely backwards and not led by the Holy Spirit, but led by our corruptible flesh. Too many times, we sense a feeling of emotional gratification and confuse that with God’s voice. God does not speak through our contentment in fulfilling what we willed ourselves to do. God speaks first through commands which should be immediately followed by obedient surrender. God is constantly speaking with a still small voice through our conscience, Christian family, Christian friends, pastors, spiritual mentors and, most importantly, through the reading of His word. However, our nature tends to demote His voice under our willful desires.

An often used tactic by which many Christians attempt to accomplish this is to “put out the fleece” in order to seek God’s approval. This is when we have made up our mind on what we want to do and seek a sign from God to affirm our decision. This practice comes from the famous story of Gideon and his use of the fleece to confirm God’s plan for him to lead the armies of Israel against the Midianites. However, in the case of Gideon and all other similar examples from the Bible, God’s command came first. Then His weak followers needed a sign to bolster their faith and courage. When we make up our own mind and then seek God’s sign, we are operating like a Constitutional Monarchy where the rubber stamp is nearly assumed. This is a mockery of God’s Kingship. We must follow His command, not negotiate a contract with Him. 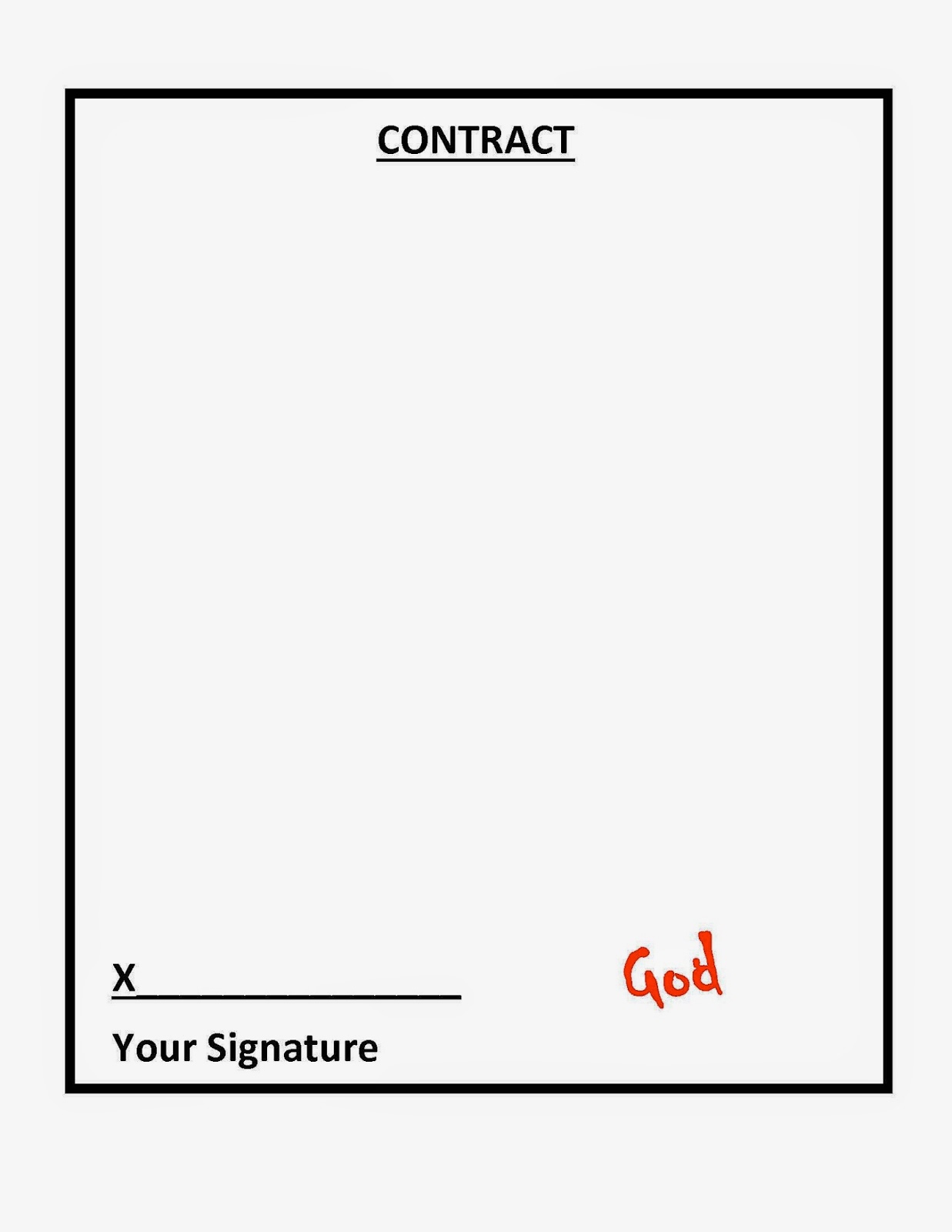 In Matthew 16:24-25, Jesus says, “If anyone would come after me, let him deny himself and take up his cross and follow me. For whoever would save his life will lose it, but whoever loses his life for my sake will find it.” And, Jesus personally walked this example out as described in Philippians 2:5-11. When Jesus faced the ultimate sacrifice, His brutal execution and separation from His Father, in the Garden of Gethsemane He cried out to His Father with no reply. He concluded His blood-wrenching cries by saying, “My Father, if it be possible, let this cup pass from me; nevertheless, not as I will, but as you will.” This is an acceptable prayer and a model of how we should approach a contract with God.

In business, a binding contract requires consideration or payment. In our contract with God, He paid it all with His own blood. With His blood He signed the contract on the form of a blank sheet of paper and asks those who call Him, “King,” to sign it as you would a blank check. And, with such a contract God has the sole right to fill in the contract with whatever terms He chooses, no ifs, ands or buts. And, we have no right to negotiate His terms with Him. It is ours only to honor the contract.

I close with the famous lyrics of the song, “I Surrender All.” As you read these words, ponder anew what the word “all” means for you: