HGTV and the Rule of the Mob

Late last year, when the A&E-Duck Dynasty controversy broke over Phil Robertson’s comments regarding homosexuality, it was a big story. However, it was a big story for primarily the wrong reasons. The controversy initially centered on A&E's virtual termination of Robertson over his comments regarding homosexuality as sin. However, the real travesty of the story was the growing trend towards mobocracy and the infringement of freedom of religion and freedom of speech. In fact, there were many, even in the Church, who openly defended A&E’s decision in bizarre deference towards political correctness as opposed to God's correctness. I personally engaged in conversations with several who I know to be my spiritual brothers and sisters, who were sadly bent on turning an affirming eye towards what was actually trending regarding religious oppression of their brother. I found myself constantly asking them to consider the ramifications that our spiritual enemy intends with this controversy. Sadly, too many were more offended by genuinely impassioned pleas over being offended by the true culprit and the activities which truly oppose our God.

Fast forward to May, 2014. Now, following A&E's lead, HGTV has decided to cancel the show, “Flip It Forward,” hosted by the twin brothers, David and Jason Benham. HGTV did not cancel the show over content or better shows vying for the slot. No, their stated reason was due to the brothers’ outspoken views a few years ago regarding homosexuality and abortion. Yes, as you can imagine, the Benham brothers are professing followers of Jesus Christ. And, yes, as you can imagine, their comments were entirely consistent with God’s word. And, yes, freedoms of religious expression and speech are being rampantly infringed while the hypocritical mob applauds. As these precedents continue to mount, the cost of following Jesus in America also continues to mount. And, it will get very ugly before it is all over, just as Jesus said it would.

For Christians who supported A&E last year in spite of the impassioned pleas of your fellow brothers and sisters, please consider this event as a confirmation that this trend is growing in danger. We should all pray for the Benham brothers and support them in the struggle against our real spiritual enemy. We should all clearly recognize the precedent that is being set and stand lovingly opposed to those who would seek to oppressively infringe the freedoms of religion and speech of those we call our eternal family. Do you truly support Christian "witch hunts?" Lastly, we must all realize that political correctness is an idol that is being used by our true spiritual enemy to take authority and allegiance away from our God and His word. It is not too late for us to denounce and destroy this idol in our individual lives. We are called to not follow the majority (or the mob) because the mob will lead us over a spiritual cliff. Rather, we are called to walk the "narrow road" marked by repentance and submission of our fallen intellect to the Creator of all intellect.

To those who stubbornly insist upon supporting HGTV in this decision, it is absolutely critical to remember that freedom of religion and freedom of speech are explicit in our Constitution. Freedom from innocent remarks that oversensitive people might find offensive is not. In fact, no legal protection exists even for those genuinely offended by the most offensive remarks. It is a violation of law and civil liberties when any private or public enterprise punishes someone purely on the basis of their religious views, stated or unstated. It is not against the law to call homosexuality a sin, just as much as it is not against the law to call heterosexual promiscuity a sin. Neither is it against the law to publicly oppose and rally against abortion. Ironically, it was not merely a few years ago when the infamous ACLU stood beside and defended Neo-Nazis when they would publicly tout the most heinous views ever touted. And, the ACLU was right in doing so under the Constitution. However, today, the ACLU is ironically silent as the bullying mob surrounds those who dare to share their biblical views in public.

For those in the church who stubbornly bow the knee in any degree towards political correctness, please take heed to what our God has said in His word. Proverbs 17:15 says, “He who justifies the wicked and he who condemns the righteous are both alike an abomination to the Lord.” Exodus 23:7 says, “Keep far from a false charge, and do not kill the innocent and righteous, for I will not acquit the wicked.” 1 Corinthians 1:25 says, “For the foolishness of God is wiser than men, and the weakness of God is stronger than men.” And, in Acts 5:29 Peter said, “We must obey God rather than men.” 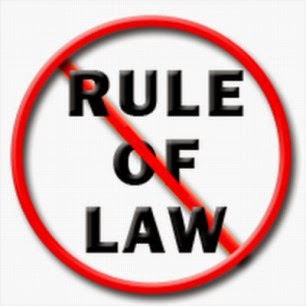 America was founded as a Republic. The word, Republic, comes from the Latin word, “Republica,” which means “the public thing.” The "public thing" refers to the law. A Republic is therefore governed by “the rule of law.” The representatives of the people are elected by the people to write law for the people as servants of the people as directed by the people. That law is then made public where it should rule the people impartially. Therefore, we have a society established under the rule of law, not the rule of people, especially not the oppressive mob of political correctness. Such oppression is not democracy but rather hypocritical mobocracy. Mobocracy is the exact opposite of Republic. If we forsake the rule of law, we choose to descend into oppressive tyranny. This is the cycle that history has repeatedly taught us and always with the same result: decline, destruction and death.

If terminating Christians for their views is legal, then what stops a Christian-led organization from terminating an employee over their pro-homosexuality views? If you support HGTV, would you similarly support a Christian-led organization in that scenario? If not, you judge yourself for a dangerous and hypocritical double standard. This last scenario should highlight for the mobocrats that there are no such oppressive activities protected under the public law under which we elected to be governed. Rather, these acts of unjust treatment against Christians are examples of the rule of the oppressive mob under the banner of political correctness and tolerance of everyone except Christians.

We either have the rule of law, or we will suffer the cruelty and depressing tyranny that every government over the entire course of mankind has witnessed every time they turned their backs on it. As the historian, Carlton Hayes put it, “Wherever Christians’ ideals have been generally accepted and their practice sincerely attempted, there is a dynamic liberty; and wherever Christianity had been ignored or rejected, persecuted or chained to the state, there is tyranny.”

Of course in the Benham case, words were conveniently put in their mouths by radicals with a wicked agenda that is not worthy of our alignment. Therefore, I will close by letting the Benhams speak for themselves. Read their gracious response to HGTV's actions and judge for yourself whether they are as they are being portrayed by the radical mob. May their words be an inspiration in your life today:

"The first and last thought on our minds as we begin and end each day is: have we shined Christ’s light today? Our faith is the fundamental calling in our lives, and the centerpiece of who we are. As Christians we are called to love our fellow man. Anyone who suggests that we hate homosexuals or people of other faiths is either misinformed or lying. Over the last decade, we’ve sold thousands of homes with the guiding principle of producing value and breathing life into each family that has crossed our path, and we do not, nor will we ever discriminate against people who do not share our views. We were saddened to hear HGTV’s decision. With all of the grotesque things that can be seen and heard on television today you would think there would be room for two twin brothers who are faithful to our families, committed to biblical principles, and dedicated professionals. If our faith costs us a television show then so be it."