Why Science Fails to Explain Water

I heard a story about an elderly amusement park worker who was approached by a young couple. “Excuse me,” said the girl, pointing to a pond. “What is that water made out of?” Bemused, the wise old man replied, “Two parts hydrogen and one part oxygen.” “See?” she said to her boyfriend. “I told you it wasn’t real.” Aside from being humorous, the present plausibility of this story highlights two sober conclusions. First, most people are entirely too ignorant about the science that surrounds them. More to the point of this post, water (both its existence and its properties) offers so many mysteries that it is the next best thing to being unreal. 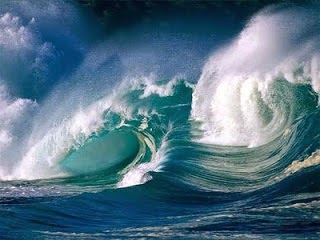 On that conclusion, earlier this year, LiveScience published an article titled, “The 8 biggest mysteries of our planet.” I will address a few of these in upcoming posts. This post will address why science fails to explain the origin of water on Earth. By way of background, evolutionary theorists believe that Earth was a "dry rock" after it cooled 4.5 billion years ago. If that is the case, then where did this essential chemical, H2O, come from? This “dry rock” cosmology regarding Earth’s formation fails to explain the most significant aspect contributing to our blue planet…water. The main reason why our planet is even capable of sustaining life is the existence of water. We as living organisms are physically comprised to a large degree of water. Without it, none of us would exist. And, the “dry rock” fiction regarding our planet’s origin simply does not add up to explain what we observe every day. In order to address this mystery of water’s origin, they have offered that perhaps an interstellar delivery system, in the form of “massive icy asteroid” impacts is the cause: “Pummeled by icy asteroids, the Earth could have replenished its water reservoirs.” But, they also admit, “The beginnings of Earth's water are shrouded in mystery because so little rock evidence remains.” The most significant words that you should take away from this clumsy thread of thoughts are, “so little evidence.”

First of all, this admission implies the obvious. Their belief about the Earth’s formation is not supported by the evidence. Therefore, it is likely false. In the practice of science, when evidence (or the lack thereof) opposes you, you are not afforded the opportunity to make scientific conclusions in favor of your thinking. You may resort to philosophical conclusions. But, even philosophical conclusions must be both logical and supported by available evidence.

Secondly, if there is so little evidence, shouldn’t this be treated as faith and not science? I have no problem with someone admitting their theories require faith. But, we should all have a very big problem when faith deceptively masquerades as science. That is mass deception. But sadly, denying their deception, they even double down with theories of “massive icy asteroids” impacting Earth, even though the geologic evidence supports no such claim. Even aside from the geologic evidence, from what source would we receive “massive icy asteroids?” We can’t even explain the origin of less massive icy comets, much less more massive icy asteroids. And, the combined mass of water on our planet would require so many icy asteroids that the combined impacts would likely reshape or destroy Earth's terrestrial mass. And, even if there was a source of massive icy asteroids, the fact that Earth is sandwiched/shielded by much more massive/gravitational bodies in our Solar System (the Sun and Jupiter), how and why would such asteroids even make it to Earth? I could go on with unanswered questions, but continuing to do so should insult everyone’s intelligence.

Thirdly, if something can be so broadly accepted in scientific circles with “so little evidence,” why are so many other concepts ignored and banished that have so much more evidence, like Intelligent Design Theory (IDT)? Doesn’t the existence of such a massive amount of water, whose origin is mysterious, and whose benefit is to uniquely sustain all life on our planet in concert with the equally mysterious existence of the moon (upcoming blog), actually scream of design? Therefore, why is IDT scientific heresy, but their cosmic “dry rock” babble not? In fact, how is their theory any different from me randomly claiming that a planet once existed in our solar system made entirely of water that exploded 3 billion years ago, and since this planet was actually nearest to Earth, it was just absorbed by our gravitational mass? Sounds clever, doesn’t it? The problem is that this too would be unsubstantiated fiction. But, that is how easy it is to burp out thoughts without discipline and without evidence. I can do it and so can a child. But, the Scientific Method was designed to transcend undisciplined and childish brain burps.

The only engine of orthodox science is the Scientific Method. All other producers of information and half-cocked thoughts are outside the realm of science because they have not sufficiently been subjected to the rigors of the Scientific Method. In short, if you don’t have logical and consistent data, you don’t have science. And, if what you babble is not science, then at best it is philosophy. And, if philosophy stands at odds with available evidence and the laws of logic, then it is at best poor philosophy and at worst pernicious babble.

Genesis 1:7-10 says, “And God made the expanse and separated the waters that were under the expanse from the waters that were above the expanse. And it was so. And God called the expanse Heaven. And there was evening and there was morning, the second day. And God said, ‘Let the waters under the heavens be gathered together into one place, and let the dry land appear.’ And it was so. God called the dry land Earth, and the waters that were gathered together he called Seas. And God saw that it was good.” And, concerning God’s authority over His watery creation, Jeremiah 31:35 says, “Thus says the Lord, who gives the sun for light by day and the fixed order of the moon and the stars for light by night, who stirs up the sea so that its waves roar—the Lord of hosts is his name.”

My favorite pastime is to sit on a beach and stare at the massive Atlantic Ocean. I grew up in the Bahamas where God put His creation of water into a special place in my heart. The reason why I so enjoy staring at the ocean is that it centers me like nothing else. Its massive existence defies all that I can truly understand. As I meditate on its creation, I can’t help but bow to its Creator. For me, aside from life, there is no greater inspiration on our planet towards recognizing and praising our Creator than what lies before my eyes on a sandy beach.

If you survey the vast oceans and see them for the awesome creation that they are, then you are wise. If, however, you survey such otherwise unexplainable phenomena and willingly jump to accept foolish and unsubstantiated claims about unproven massive asteroid impacts, then what is the difference between you and the silly girl in the amusement park? Such blind acceptance in the name of science is the equivalent of bypassing science and embracing a conclusion scientifically equivalent to claiming H20 is not real. But, my guess is that we all agree that water is very real, and we all realize that it is larger than we are capable of explaining. So, we all have this common ground.

Where we lack common ground is in the way each side of the discussion characterizes water’s mystery. It is a mystery to me because I can’t fully understand God, its Creator. It is an even greater mystery to evolutionists because they have fictionalized its origin by looking for non-existent evidence in everything but its Creator.