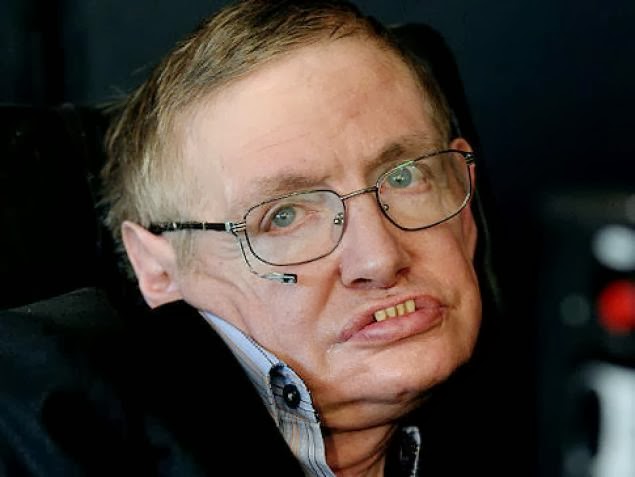 When I was young, one of the more famous series of TV commercials were those by the stock brokerage firm, E. F. Hutton. A typical commercial would open up with two men having a conversation about each other’s stock portfolios in a very public place. Inevitably, one of the gentlemen would say, “Well, my broker is E. F. Hutton, and E. F. Hutton says …” Immediately, everyone in the scene goes visibly silent in an attempt to eaves drop on the conversation. After the two men awkwardly observe this reaction, the announcer would voice over, “When E. F. Hutton talks, people listen.” In intellectual circles today, a similar phenomenon happens whenever the name Stephen Hawking is invoked. It is as if to say, if Hawking says something, then Hawking is right and you are wrong.

As I have written about before, Hawking is widely regarded as the most intelligent man alive today. He is an author, physicist and unfortunately an atheist. Therefore, inevitably, he says some pretty pointed things about his beliefs about God from time to time. In addition to the obvious fact that quotes about God are the practice of philosophy and not science, proving the non-existence of God is not even practical within the scientific method. It is a notion that is outside of the practice of science. And, Hawking is a brilliant scientist but a woefully poor philosopher. But this does not stop the philosophically lazy from blindly worshiping Hawking’s quotes.

This modern day worship of Hawking’s intellect is another form of the logical fallacy, “Argument to the Man.” In an earlier post, I exposed the more common version, which is when someone attempts to refute an idea by solely attacking the person who voiced it ("Shooting the Messenger"). The other version of Argument to the Man is when someone claims something is true just because some widely-regarded intelligent man, like Hawking, said it. That too is a logical fallacy. There is no such thing as infallible human intellect. In Hawking’s defense, he never claimed his intellect to be infallible. In fact, Hawking agrees with me on the conclusion of his fallibility as witnessed in a very recent admission of the last 40 years of his errant science.

A significant portion of Hawking’s work is based upon his previously published theories regarding the nature of black holes (1974). Hawking today says that his own theories, that include the notion that nothing is capable from escaping a black hole, were wrong. Now, 40 years later, he is arguing that it might be possible for light and information to escape a black hole. On his 70th birthday, Hawking told an interviewer that he regards his original idea that information was destroyed by black holes as his "biggest blunder." That hardly sounds like an infallible intellect.

Below are a few more errant quotes by Hawking where he attempts to blur the lines between science and philosophy, followed by a simple question that we might ask in response:

“There is no heaven; it’s a fairy story.” [Well, can you prove such an assertion?]

“The universe can and will create itself from nothing.” [Well, is there any evidence that supports this circular reasoning?]

“We are each free to believe what we want and it is my view that the simplest explanation is there is no God. No one created the universe and no one directs our fate. This leads me to a profound realization. There is probably no heaven, and no afterlife either. We have this one life to appreciate the grand design of the universe, and for that, I am extremely grateful.” [Well, if the universe has a “grand design” and there is no God, who designed it?]

There is no man who is infallible in their intellect, including yours truly. Christians must never surrender the throne of infallibility to fallible flesh and blood. That is reserved for God and God alone. And, God’s intellect has never been found to be in error. It is with God’s intellect that all intellect will be judged … and found wanting. The polar opposite of Argument to the Man is Argument to God, which is an argument that will never suffer "blunder."

We Christians, intelligent or not, should never cower the mind of Christ to that of a fallible man no matter how intelligent the entire world thinks he is. Consider the words of 1 Corinthians 1:26-31, “For consider your calling, brothers: not many of you were wise according to worldly standards, not many were powerful, not many were of noble birth. But God chose what is foolish in the world to shame the wise; God chose what is weak in the world to shame the strong; God chose what is low and despised in the world, even things that are not, to bring to nothing things that are, so that no human being might boast in the presence of God. And because of him you are in Christ Jesus, who became to us wisdom from God, righteousness and sanctification and redemption, so that, as it is written, ‘Let the one who boasts, boast in the Lord.’”

I, therefore, aptly close with a quote from the infallible God from Psalm 19:7-10: