In 2009, Warner Brothers released the hit movie, “The Blind Side,” based upon the successful book by the same name. The main storyline centers on the true story of rags-to-football success, Michael Oher. The film opens with a look back to the famous 1985 football game between the Washington Redskins and the New York Giants. This game was famous because of one play and the injury that resulted. Viewers of ESPN voted it as the “Most Shocking Moment in History” and The Washington Post dubbed it, “The Hit That No One Who Saw It Can Ever Forget.” The Redskins ran a “flea-flicker” play and the Giants blitzed. Linebackers Lawrence Taylor and Harry Carson combined for the sack on quarterback, Joe Theismann that resulted in the compound fracture of both his right tibia and fibula on live national television. The movie referred to this play as changing the game forever. Theismann, a right handed quarterback, had turned right to pass the ball leaving his back to the oncoming linebackers from the other side, his blind side. From that day onward, offensive coordinators have come to respect their quarterback’s blind side and have adjusted their plays to properly protect it. Imagine what would happen to quarterbacks if teams were not trained to properly protect their blind sides today. For all the ridicule that football players and coaches receive for allegedly not being as smart as the rest of us, they were wise enough to recognize the blind side and properly adjust. Sadly, that is more than we can say for the science of archaeology today. 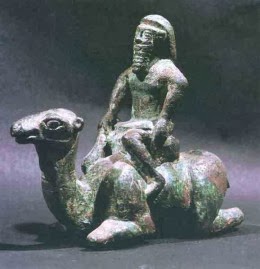 Earlier this month, archaeologists from Israel’s top university announced the pinpointing of the arrival of domestic camels to the Middle East as some time after the events of the Bible. This, they say means, “science directly contradicts the Bible’s version of events.” Camels are mentioned 58 times in the Bible as far back as the story of Abraham's migration in Genesis 12 (between 2000 and 1500 B.C.). But Erez Ben-Yosef and Lidar Sapir-Hen of Tel Aviv University's Department of Archaeology and Near Eastern Cultures say camels weren’t domesticated in Israel until centuries later, more like 900 B.C. Sapir-Hen and Ben-Yosef arrived at this conclusion by using radiocarbon dating to analyze the oldest known camel bones in the Arabian Peninsula (Aravah Valley), which runs along the border with Jordan from the Dead Sea to the Red Sea. The few camel bones found in earlier archaeological layers they claim “probably belonged to wild camels,” which archaeologists believe (without proof) lived in earlier periods of history.

These grossly reaching conclusions beg some obvious questions. How is camel bones being found no earlier than 900 B.C., proof that they did not exist in the region before then? Couldn’t camels have existed there without leaving verifiable remains? If the lack of remains means that camels did not exist, then what does that say about the lack of remains for “The Missing Link” in the evolution of man? Since camels were obviously recorded in other neighboring regions without dispute, why is it not possible that someone migrating from those regions brought camels with them (Abraham migrating from Mesopotamia)? How did they determine that bones found from earlier periods were “wild” and not domesticated? And, why did they not state how they determined this? How does this find even begin to prove the Bible to be false? I could go on and on with questions. But, the main thing their claims expose is the chosen blindness of these archaeologists and not the blindness of the Bible.

Tunnel vision is the loss of peripheral vision with retention of central vision. But, that medical condition is not voluntary. Here, archaeologists are voluntarily choosing to be blind to the evidence to the left and to the right of them. They have ignored all disciplines except their own to claim the Bible is false. And, even confined to their own discipline they have yet to prove what they claim. The Bible remains as the most reliable book of historical antiquity known to man by every test, not the least of which is archaeology. And, regarding the discipline of archaeology, the Bible is the most supported book above all others. And, it remains the best in class with regards to all other disciplines as well. Tunnel vision has no place in science nor in conclusions that only partially rely upon the malpractice of science.

Archaeologists in this case are reading about Abraham's migration with camels from Mesopotamia (includes Iran) to regions we now call Israel. But, from this first Genesis mention these archaeologists are placing words in the Bible that are not there. They are claiming this reference means the Bible is saying that camels were widespread. Nothing could be further from the truth. The Bible never even implied that. Further, the other people mentioned in the early parts of the Bible as having camels were direct descendants from the same Abraham. Otherwise, there are no Biblical mentions of Israelites owning camels.

Dr. Andrew Steinmann, Distinguished Professor of Theology and Hebrew at Concordia University-Chicago, put it this way, “the findings show that Old Testament accounts are very accurate, because they confine it to people from Mesopotamia or the Arabian Peninsula … At least 1,000 years before Abraham, dromedary camels — the single hump ones — were domesticated, and Bactrian camels probably 500 years after that … So we know people in Iran did it, and it spread … We have good evidence from Mesopotamia that there were domesticated camels then.” Therefore, Abraham migrating from Mesopotamia to the Israeli region with domesticated camels in tow is accurate and these archaeologists look foolish.

What does it say when archaeologists make such conclusions? Did they set out to determine the truth about camel migration or domestication? Or, did they set out to discredit the Bible? Apparently, since their conclusions are so laser focused on the Bible, it suggests both their intent and their bias are suspect. Archaeology is not the study to disprove a singular historical document. The dictionary defines archaeology as “the scientific study of historic or prehistoric peoples and their cultures by analysis of their artifacts, inscriptions, monuments, and other such remains, especially those that have been excavated.” According to its definition, and based upon the actual claims of their study, these archaeologists should be giving the Bible the benefit of the doubt. But, that would defeat their purpose, which apparently is not archaeology.

When less educated football players and coaches ignore the blind side, legs get broken. When scientists do it, science is what gets broken. Such archaeologists would be better served by surrounding their research with all other peripheral disciplines before making such wild and narrow-sighted conclusions. And, this also applies to Christians. Proverbs 15:22 says, “Without counsel plans fail, but with many advisers they succeed.” In other words, take a lesson from football by recognizing and covering your blind side.
Posted by Tim Albury at 8:00 AM
Email ThisBlogThis!Share to TwitterShare to FacebookShare to Pinterest
Newer Post Older Post Home