Coming Soon! An Atheist Church Near You!


I once heard a story about an old lady and her atheist neighbor. Every morning, the lady, a Christian, would come out on the steps of her front porch, raise her arms to the sky and shout, "Praise the Lord!" Over time, her atheist neighbor became irritated by this ritual. So every morning he would step out onto his front porch and yell after her, "There is no God!" Time passed with the two of them carrying on this way every day. Then one morning in the middle of winter, the old lady stepped onto her front porch and shouted, "Praise the Lord! Lord, I have no food and I am hungry. Please provide for me, oh Lord!" The next morning she stepped onto her porch and there were two huge bags of groceries sitting there. "Praise the Lord!" she cried out. "He has provided groceries for me!" The atheist jumped out of the hedges and shouted, "There is no Lord. I bought those groceries!" The old lady threw her arms into the air and shouted, "Praise the Lord! He has provided me with groceries and He made an atheist pay for them!" While the central comedy of this story is in the punch line, isn’t ironic how the atheist started imitating the Christian in multiple ways? This may sound ironic, but today it is has become a vivid reality. 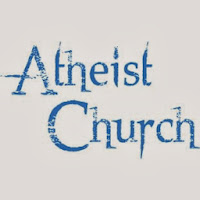 Earlier this month, the Associated Press ran an article titled, “Atheist ‘Mega-Churches’ Take Root across US, World.” The article went on to recount how on Sunday mornings around the country and in other parts of the world congregations of atheists are meeting. Their meetings begin with rousing music, followed by an inspirational talk and quiet reflection. Does this sound familiar?

The number of these atheist mega-churches (a term coined by both its supporters and detractors) has grown to around three dozen in the US, Australia, Great Britain and elsewhere. In cities including Los Angeles, San Diego, Nashville, and New York, are assemblies of hundreds of people bound by belief in unbelief. They claim to seek the camaraderie of a congregation without religion or ritual. But, isn’t their assembling every Sunday the very practice of religion and ritual? They even pass around cardboard boxes (instead of plates) in order to take up donations at the end of their … services.

The founder of this movement even confessed about real churches, “If you think about church, there's very little that's bad. It's singing awesome songs, hearing interesting talks, thinking about improving yourself and helping other people - and doing that in a community with wonderful relationships. What part of that is not to like?” To which, we might respond, “We agree. Please join us!”

In their attempt to be different from Christian churches, these atheist churches even have their own unique credo, “Live Better, Help Often, Wonder More.” While having a credo absolutely does mimic true churches, we are left to respond to their credo, “Why?” Why should we live better? Why should we help often? Why should we wonder more? Is there some moral reason why these things should be done? What is the universal moral authority that dictates that this credo is in fact moral or worthy? What if I enjoy indulging in the exact opposite behavior? If their credo is not morally founded, then why follow it? Is there anything wrong with living worse, helping little or wondering less? If their answer is affirmative, then we are left to ask upon what authority do they so conclude. If there is no God, why bother, especially if I don't enjoy following the credo?

Isaiah 64:6 says, “We have all become like one who is unclean, and all our righteous deeds are like a polluted garment. We all fade like a leaf, and our iniquities, like the wind, take us away.” All of “our” righteous deeds are like a polluted garment because they are either borne from a motive other than God's love or are far out-numbered by our more pervasive self-centered deeds. Any attempt by any person, including atheists and Christians alike, to be better or help others falls far short of the only true source of righteousness, which is the One who is always right (God). For this reason, true Christians claim no righteousness of their own doing, but of the doing of the One who calls them righteous. Atheists in contrast attempt right living while denying a universal source of right and wrong. They thereby measure their deeds as righteous by their own humanly twisted and innately subjective standards. The only way to live better, help often and wonder more is to surrender to the Source of all life, the Supreme Helper and the Creator of all that inspires wonder.

Even fellow atheists are quickly pointing out the obvious irony. For example, the article quotes Michael Luciano, a blogger at policymic.com, “There's something not OK with appropriating all of this religious language, imagery and ritual for atheism.” On this, we might agree. In an earlier post, "Atheism is a Religion" I pointed out the fact that atheism is in fact a religion as it is a system of beliefs (faith) that people follow. This latest church movement by devoted atheists is just the latest piece of compelling evidence that proves this assertion to be true.

But, the real troubling trend is not atheists displaying religious behavior. What is more disturbing is the trend in the opposite direction. Psalm 14:1 says, “The fool says in his heart, ‘There is no God.’ They are corrupt, they do abominable deeds, there is none who does good.” This verse is often used to attack or describe atheists. The truth is that this passage was not penned with exclusively atheists in mind. In fact, notice how the verse does not say, “the fool says in his mind, ‘There is no God.’” Rather, the passage addresses the heart. The Hebrew word for “heart” is “lebab” which means in its truest sense, the inner man or the seat of man’s emotions. This verse is not referring to our mind or our brain. We know this from 1 Samuel 2:35 where God uses the word, “lebab,” for heart and the word, “nephesh,” for mind both in the same verse. The two have different meanings. Even Jesus differentiates between the two in His challenge of us in Matthew 22:37, “You shall love the Lord your God with all your heart and with all your soul and with all your mind.” Therefore, Psalms 14:1 is not calling a fool someone who has reasoned in his mind that there is no God. It is calling a fool the one whose inner self and emotions deny Him. And, that would include the “christian” who claims to believe in God in his mind and thoughts, but denies God with his lifestyle. The Bible calls that person a fool.

The biggest problem in the church today is not atheists mimicking Christians. The bigger problem is Christians mimicking atheists.
Posted by Tim Albury at 8:07 AM
Email ThisBlogThis!Share to TwitterShare to FacebookShare to Pinterest
Newer Post Older Post Home