I heard a parable once about a hunter who was tracking a bear. When he finally came upon the animal, the bear noticed and starting walking towards the hunter. The hunter raised his gun and took aim. But, before he could shoot, the bear surprisingly said, “Wait! Why do you want to shoot me?” “Because I am cold,” said the hunter. “But I am hungry,” replied the bear. After a short hesitation, the bear said, “Maybe we can reach a compromise.” In the end, the hunter was well enveloped within the bear’s fur and the bear had eaten his dinner. This is a great illustration of what happens when we compromise with something deadly. And, like the hunter, Christians always lose when we try to compromise with sin. Like the bear, sin is also consuming. 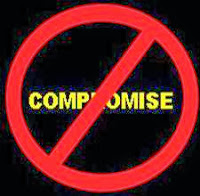 I hear so many in our churches today boldly preaching a new form of compromise with the world. They say, “In order to be relevant, you have to compromise.” In other words, if you fail to compromise on Biblical standards, you will not be relevant.  Therefore, if you are not relevant, you won’t reach people with the gospel. But, is that true? Sure, we all agree that legalism is probably not going to be effective. But, legalism is not what Jesus called us to reflect. And, neither is sin. In fact, did Jesus compromise His standards while He was physically here? And, is Jesus relevant? Jesus never compromised and is relevant to every man, woman and child. Therefore, relevance doesn't require compromise.

Yes, it is vitally important that our message is relevant to those to whom God sent us. But, what could be more relevant to man than lovingly sharing the gospel of Jesus Christ and praying blessings over those He died for? The gospel of Jesus defines who man is, describes man’s condition, meet’s man’s every need, and gives man the opportunity for forgiveness, immortality and a royal identity. Is there anything more relevant to mankind than that? The gospel message does not need sinful wrapping to relate.

Before we leave the subject, God clarified this even further elsewhere in the New Testament. Let’s look at just a few of the many examples:

Romans 12:1-2 says, “I appeal to you therefore, brothers, by the mercies of God, to present your bodies as a living sacrifice, holy and acceptable to God, which is your spiritual worship. Do not be conformed to this world, but be transformed by the renewal of your mind, that by testing you may discern what is the will of God, what is good and acceptable and perfect.”

Romans 13:14 says, “But put on the Lord Jesus Christ, and make no provision for the flesh, to gratify its desires.”

James 4:4 goes even further, “You adulterous people! Do you not know that friendship with the world is enmity with God? Therefore whoever wishes to be a friend of the world makes himself an enemy of God.”

The argument towards compromising Biblical standards for the sake of the Gospel of Jesus is a lie that is meant by the enemy to distract us from the very goal that it claims to support. I have yet to meet effective Christians who gain souls by proclamation of the gospel using compromise with the world as their means. In contrast, I have met many “Christians” who have lost their influence and have been consumed by what they approve. Speaking of what we approve, 1 Thessalonians 2:4 says, “but just as we have been approved by God to be entrusted with the gospel, so we speak, not to please man, but to please God who tests our hearts.”

God has singular authority to define relevance, not man. And, God also has singular authority to tell us what tasks we must execute in order to be relevant. And, those tasks that we must execute are spelled out by Jesus Himself in His final and parting command to us all as recorded in Matthew 28:18-20, “All authority in heaven and on earth has been given to me. Go therefore and make disciples of all nations, baptizing them in the name of the Father and of the Son and of the Holy Spirit, teaching them to observe all that I have commanded you. And behold, I am with you always, to the end of the age.” As a Christian, and someone who calls Jesus “God,” “Lord,” and “King,” do you have something more relevant to do than obey His final command … without compromise?
Posted by Tim Albury at 7:58 AM
Email ThisBlogThis!Share to TwitterShare to FacebookShare to Pinterest
Newer Post Older Post Home